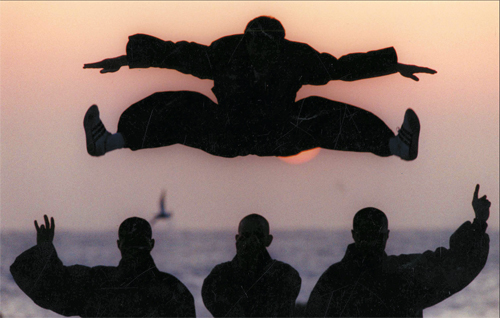 They have their own code of honor and their own special milieu they call murim, or martial art world. But outside their relatively small sphere of influence, few people take much notice of them.

The inhabitants of murim are loyal adherents of scores of martial art disciplines which are practiced in a country where taekwondo has taken the spotlight.

In the last few decades, taekwondo has become the most heavily commercialized of any martial art here. Some people view practitioners of lesser-known martial arts as nut cases, men (mainly) who practice forms of combat of untraceable origins invented in backyards and handed down by word of mouth through generations.

Such relative obscurity has led to financial difficulties for many of the less visible forms of combat.

But a law passed in March this year has seen the murim bracing itself for much desired change.

The law provides a legal framework for supporting financially the disparate martial art groups and grooming fledgling masters and students in a more systematic way.

The Culture Ministry initiated a study in 2003 of all the martial art disciplines in the country. As a result, 48 martial art sports practiced by 106 registered groups were identified.

But there maybe even more to find.

“It’s not like we went to every mountain cave and temple. There may be more [practitioners] out there but we think we got the main branches sorted out,” says Ku Jeong-wu, a ministry official.

Ku says one of the first steps is to define what exactly is a traditional martial art in order to earmark recipients of government support. 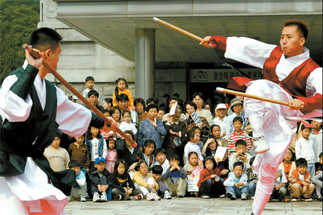 In line with the new law, which will have a grace period of one year during which details will be hammered out, six masters gathered for the first time earlier this month to discuss the future of traditional martial arts, many of which experts fear are dying out.

Each master represented one martial art discipline, such as taekkyeon, a full contact sport from the Goguryeo Dynasty (37 B.C.E. to 668 C.E.).

But while the idea of reviving and protecting traditional martial arts here seems like a worthy idea, the complex web of intrigue within the murim is not making the task any easier.

Park Kwon-mo, a master of the martial art form 18 Gi, which is said to have originated during the Joseon Dynasty, argues that the standards needed for official recognition as a traditional martial art present everyone involved with a dilemma.

“Right now, there is one group saying that traditional martial arts should be categorized based on historical evidence such as official records. Then there is another group saying martial art disciplines that have a bigger following should be given official status,” says Park. 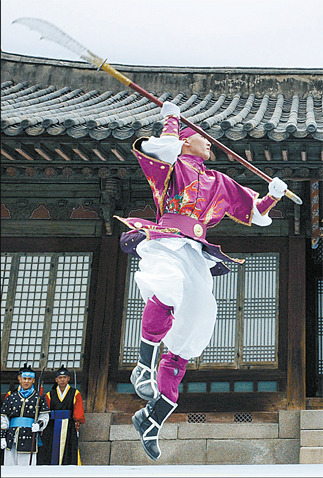 He points out that if official recognition is handed out based on the influence of a martial art discipline, those disciplines that have a small following might lose out.

“18 Gi has only six gyms in the whole nation but it has a long tradition. It is mentioned in the Muyedobotongji very clearly,” Park proudly points out, referring to an official martial arts manual from the late 18th century.

“We are monitoring the situation, but a lot of people are afraid they will be excluded,” he adds.

Park says the first 18 Gi gym opened in 1968 and about 20,000 students have been certified so far. By contrast, taekwondo has more than 10,000 gyms nationwide, according to the Culture Ministry. 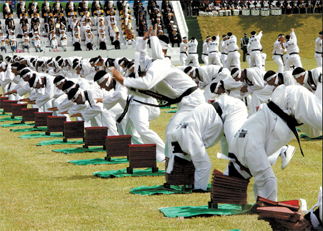 “Taekwondo gets full government support. If others got only a fraction of that help, many masters would not worry about survival,” argues Park. Under late President Park Chung Hee, taekwondo was promoted as the nation’s premier martial art.
Lawmaker Lee Si-jong of the United Democratic Party is the driving force behind the new law to support traditional martial arts.

“It’s a shame we have nationwide contests based on European sports but nothing traditional. Why not have sports contests of all the traditional martial arts?” Lee argues.

Last September, in what was the first attempt to organize such a contest, 3,000 martial artists from all over the country gathered in Chungju, Chungcheong, to showcase their skills. The city is also the venue for the Chungju World Martial Arts Festival.

A similar event is planned for August, this time with the Culture Ministry chipping in 250 million won ($239,000).

“Starting next year, we plan to move the competition from city to city to garner support,” says Lee. “The Chinese Shaolin martial art has become a cultural item that does well commercially. That’s free advertising for a country. It creates legends and curiosity and leads to tourism.”

While aspirations are high for the new initiative, especially in terms of tourism opportunities, the current state of traditional martial art gyms in the country suggests that, above all, the general public needs to be onboard with any plans for revival.

Lee Hong-jeom, a female kumdo (sword fighting) master who operates her own gym, says fellow masters have felt the financial pinch since 2004. “There are many facilities that are on the market nowadays,” she says.

One of the problems is that parents have to prioritize their children’s education. Moms and dads with a limited budget often choose cram schools over sports gyms. “When kids switch to expensive English language institutes, it’s usually sports that get axed,” says Lee, who declined to reveal the number of students under her tutelage, only allowing that numbers are declining.

“We lost about 80 gyms in the past two years. Long vacation periods used to bring in elementary students, but not anymore,” says Hwang Tae-hwan, an official at the Korea Kumdo Association. “Parents thinks sending their kids abroad for language training is a better investment.”

Another reason for declining interest in martial arts, some say, is youngsters nowadays are unwilling to submit to the strict practices involved in martial arts and the onslaught of video games and PC rooms have become a diversion.

“There are so many options for kids in using their spare time. Flicking a finger [on a PC game] is much easier than working out at a gym and sweating,” says Lee Jong-cheon, an official of the Korea Taekwondo Association.

South Korea is one of the most wired countries in the world, with broadband Internet access a common commodity. There are about 21,000 PC rooms spread around the country. The Japanese game company Nintendo, which started operations here last year, sold more than 1 million units of its Nintendo DS portable game in its first year of business alone, according to company officials.

Even the taekwondo juggernaut has seen defections from its prime source of recruits, namely elementary school students. They account for about 80 percent of the total population training in the sports.

Lee says the country’s birth rate, one of the lowest among countries in the Organisation for Economic Cooperation and Development, has contributed to the decline in student numbers as well. The official said the association is alarmed by increasing signs that the taekwondo market is over-saturated.

“In recent years, the number of gyms closing has outnumbered new ones, while attendance at gyms has slipped as well,” Lee said. He added that the average taekwondo gym hosts between 50 to 100 students nowadays, a severe drop compared to a decade ago.

The total number of people practicing taekwondo in Korea is estimated at 700,000.

“We are not in any immediate danger but we are the lucky ones. Other martial arts, especially the lesser known ones, can’t say the same,” the official noted.

Experts also attribute the demise of many traditional martial arts to Japanese colonial rule (1910 to 1945).

At the end of the Joseon dynasty, when the country was already under Japanese influence, the military underwent a period of modernization. Traditional martial arts were forbidden. Instead, Japanese martial arts such as judo and kendo, a Japanese form of stick fighting, were promoted in schools and in society.

“There was a systematic effort by Japanese occupation forces to suffocate traditional martial arts here to get rid of any public focal point of nationalism,” says Lee Seong-gon, a researcher of the National Folk Museum.

He explains that since 2003, the museum has discovered five traditional martial arts, but says a lack of official records makes it hard to discover many existing ones.

While government officials say that until next March, additional measures will be woven into a comprehensive plan to revive traditional martial arts, help might be too late for some.

“Nationwide, we have 100 students,” says Jo Young-jun, a master of baekunjang, a martial art he claims dates back to the Goryeo Dynasty (918-1392). “It’s a hard sell to youngsters nowadays. They like soccer. I just hope the art will not die out.”

Lim Dong-gyu, a master of 24 ban muyedo, another martial art, claims up to 400 groups at college level practiced this form in the 1990s. Now perhaps only 30 nationwide do so.

The master is also concerned the recent passage of the law will divide the martial art world further. “The passage of the law is great but with money involved it’s politics,” says Jo. Kumdo alone has 20 groups, each claiming to be superior. “There are big groups and small ones. Then you have those claiming to be the one true descendant of a particular martial art,” says the master.

Ssireum, a traditional grappling sport like wrestling, has also witnessed a decline in popularity. The martial art has only one professional team now, down from eight in the 1980s, while the number of students enrolled in middle and high school programs is dropping.

Ssireum athletes numbered close to 3,000 in the early 1990s but last year there were only 2,000, according to the Korea Ssireum Association.

Jang Sun-ho, a coach at Dong Yang Vocational School in Seoul, says , “Eight years ago, we had 30 ssireum students. Now we have nine,” says the coach.

While Chinese kung fu has seen movie stars like Jackie Chan and Jet Li shore up its popularity, it seems modern forces and glamour are threatening the weaker traditional martial arts base here.

“There is no money here. No glory,” says Jang.