Hyper-real portraits at the artist’s fingertips

Hyper-real portraits at the artist’s fingertips 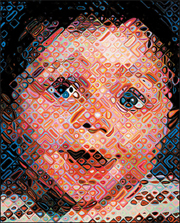 “Emma,” a woodcut print by Chuck Close, which took 18 months to complete. Provided by the organizer

The art of Chuck Close presents a spectacle that few other Western artists can create.

Perhaps it’s the strenuous physical adversity the artist puts himself through as he works on his labor-intensive projects.

In 1988, during the height of his career, Close was paralyzed.

He developed a blood clot in his spine that left him a quadriplegic.

Despite deteriorating health, he continued his prolific career.

He perfected the art of painting while sitting in his wheelchair using part of his arms.

“Chuck Close Prints: Process and Collaboration” is a series of works that intensify the artist’s hyper-realist portraiture, pictures that look uncannily true to life.

The show has been organized by Terrie Sultan, the director of the Art Museum at the University of Houston.

It puts together a vast collection of the artist’s prints.

The works on display put together Close’s photo-realist works, which question the boundary between reality and illusion.

The materials and the technique used in each print are extremely subtle.

Some works abstract and surreal.

As suggested in the title, the enormous calculation and preliminary stages of his works add to the spectacle of his art.

To heighten this effect, the show organizes a separate gallery showing bits of materials and preparatory sketches that lead up to the final production, like a plastic grid and grayscale pulp paper samples.

The exhibition is also interesting on a conceptual level.

While the artist often uses himself or his aides as models for his works, it’s astonishing how objective the images are.

The facial expressions of the people in the prints are unmoved and neutral, as if they serve as “visual data” rather than as particular subjects that convey meaning.

At one point, the numerous dots that make up the portraiture serve as visual pixels, while the portraits on the whole parallel a digitalized image and the modern art of reproduction.

To get to the museum, get off at Gwanghwamun Station, line No. 5, exit 7, and walk in the direction of Seodaemun.

Turn right at the alley between Salvation Army Hall and the Seoul History Museum.

Walk straight for 300 meters, and the museum is on your right.