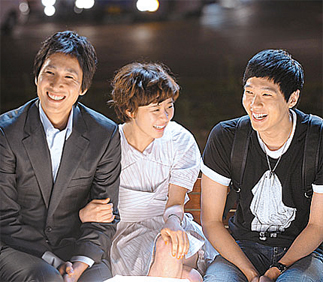 Eun-soo (center), a Seoulite in her 30s, finds herself torn between Young-soo (left) and the younger Tae-o (right). [SBS-TV]

I was feeling restless on a recent Friday at a dinner with acquaintances, watching the clock ticking away close to 10 p.m. As the clock ticked to 9:58 p.m., I finally found myself automatically standing up, mumbling the most awkward excuse that I don’t even remember now, and running toward the door.

There was nothing wrong with the delicious dinner and the healthy discussion about the crisis of the Lee Myung-bak administration. The truth was that it was Friday night, and that’s when I have to hail my new religion ? “My Sweet Seoul,” a TV series whose two consecutive episodes air from 10 p.m. Fridays.

Go ahead and laugh at me, but all I could think of then was to not lose a single minute of My Sweet Seoul.

I felt like the queen of the world when I finally reached my remote control at home. In my defense, I have to say that I am not alone in this new Friday religion, as it is giving birth to a big, fat group of followers including some of my friends, who are even canceling every Friday appointment.

The lead character is Eun-soo, a 31-year-old single woman with a seven-year-old career at a small publication company. An average girl-next-door type, she has her worries and troubles, yet manages to keep up with her reality.

She has two best friends ? Jae-in, who marries a urologist for money and social status and Yoo-hee, who gives up a successful career to pursue her dream of becoming a musical actress.

These friends are an important axis of the show, helping 30-something women viewers relate to the characters.

I mean, these women are facing a time when they are too old to overcome new challenges and yet too young to settle for reality for several more decades to come.

These women may have no regrets about the career of their own choices, but they are also troubled by the temptation of change.

Am I doing O.K.? Am I on the right track? These are the questions that confront the 30-something single women, and “My Sweet Seoul” addresses such issues to a point.

In a word, this series deals with the real stories that average women viewers can relate to, and this is the secret of its success among women viewers.

Another virtue of the TV series is its eye-candy images concocted by director Park Heung-shik, who searches every nook and cranny of Seoul to find ideal locations to make the city look pretty. The serial novel that this series is based on was titled “My Sweet City,” but the original writer and the director agreed to make it “My Sweet Seoul.”

Then there are Eun-soo’s relationships with men, as she is torn among men, not knowing which one is right for her.

First, there is Tae-o, a filmmaker wannabe who is seven years her junior, whom she met on her ex-boyfriend’s wedding night. He is filled with pure-hearted passion that enchants Eun-soo, and she manages to keep the relationship developing from a one-night stand to cohabitation at her apartment.

Yet Eun-soo feels that Tae-o is still too young and immature, so she turns to Young-soo, the established 38-year-old owner of an organic food company.

On the sidelines, there is Eun-soo’s best guy friend, Yoo-jun, who casually asks her to get married.

Indeed, it’s like the whole enchilada of relationships that a 30-something single woman could possibly face. Yet, there is no single correct answer, and viewers all have room to relate to.

Viewers of the similar age group can take solace in that they are not alone in the world facing formidable uncertainty.

After all, watching this TV series is more like having a heart-to-heart with some of your best friends, rather than getting an injection of fantasy.

The world out there is tough, and happiness seems so elusive, but at least we have friends and this TV series to go through the ebb and tide.