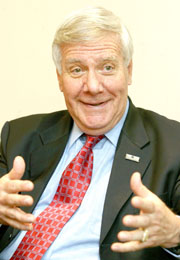 Korea has come a long way in terms of democracy and economic prosperity, and one of its friends and companions in making that journey is The Asia Foundation. An American non-profit and non-governmental organization established in 1954, the foundation aims to promote a peaceful, just and prosperous community of nations in the region and to build strong ties between the United States and Asian nations.
The foundation’s president, Douglas Bereuter, visited Seoul this week and met with former Prime Minister Lee Hong-koo, who is a trustee of The Asia Foundation and an adviser to JoongAng Ilbo, the sister paper of Joong- Ang Daily. Following is a summary of their conversation, which took place at a Seoul hotel on Tuesday. 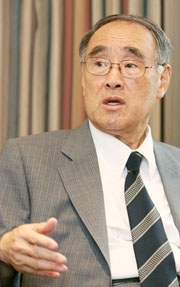 Bereuter, from Nebraska, served 26 years in the U.S. Congress, winning 13 consecutive terms. Lee’s friendship with Bereuter dates back to the late 1990s when then Congressman Bereuter was the chairman of the House International Relations Asia-Pacific subcommittee when Lee was the Korean ambassador to the United States.
The Asia Foundation runs programs in various sectors including civil society, law, women’s empowerment, economic development and international affairs. With its headquarters in San Francisco, the foundation has offices in 17 Asian countries and in Washington D.C., with a total annual budget of $100 million.
The foundation’s office in Seoul is actively working with local partners in support of Korean relations with other countries in Asia and the U.S., as well as engagement with North Korea.

Lee Hong-koo (Lee hereafter): One work of many that The Asia Foundation has been doing for more than half a century was to try to promote stable democracy in Asia. Still, there are concerns about democracy in some Asian countries. Korea’s democracy is vibrant yet unstable, and Japan’s democracy seems shaky with the low popularity of the prime minister. In Southeast Asia, we see problems in several countries like Thailand, East Timor and so on. Robert A. Scalapino, a senior colleague, was here recently and said that after more than half a century of teaching and studying Asia, he has reached a point where he is a little concerned about democracy in Asia. What do you think?

Douglas Bereuter (Bereuter hereafter): Those are some worrying signs, no doubt about it. There have been some setbacks for democracy in a number of countries especially in Southeast Asia. On the other hand, if you take a look at Indonesia in 1997 and in 1998, and if you look at where it is now, it has made a tremendous advance. I think there’s an example of a place where things are going very well. Hopefully, they will continue and I see no reason why they should not. But of course, there is still political unrest in places like East Timor, where there has recently been an attempted assassination of the president. Mongolia recently had an election, and the opposition party is contending that the election was not free and fair and there were violent demonstrations. Mongolian and international observers had some discrepancy there, and I am going to Mongolia and will be visiting leaders of all the political parties. We are anxious to continue to work to help Mongolia and other Asian countries go down the path of democracy despite recent unrest.

Bereuter: That’s right. That was why our dominant area of work has been [aiding] creation of or enhancing civil society, and a part of that has been election training work. In Nepal, we trained 19,000 election observers [for the election in April for its new Constituent Assembly]. These are Nepalese and we brought in about 120 election observers and commissioners from other Asian countries. Unanimously, the international observers said that this was a free and fair election. And the monarchy was brought to an end in a peaceful way. We look forward to training election observers in Bangladesh for elections expected in early December.

Asia and the U.S. presidential election

Lee: Because of the situation in the Middle East and the war in Iraq, many Asians are feeling that the United States has been preoccupied and somehow has not sufficiently paid attention to the growing importance of Asia. What does a new administration next year look like? Senator Barack Obama is now on a trip to Europe and the Middle East.

Bereuter: We have taken note that both of these prospective nominees obviously have ties to Asia. In January, we held our board meeting in Jakarta, and I noticed that Obama is regarded like a native son there. He went to grammar school there and his mother, an American, was involved in humanitarian work for a non-governmental organization. So he spent a part of his childhood there.

Lee: Senator John McCain, meanwhile, was a prisoner for five and a half years at the “Hanoi Hilton,” during the Vietnam War.

Bereuter: Right. These facts give evidence that both candidates are very interested in Asia. There will be certainly no less interest in the U.S. in its role as an Asia-Pacific country. So, overall, I think Asian countries or Asians who are interested in whether the United States will be disengaged from Asia, will have those thoughts quickly erased, because it’s not likely to happen. This is an extremely important region to the United States. In fact, I decided about 15 years ago as a member of Congress that what happens in Asia is more important to America’s future, so I have been visiting Korea and Japan, and later China, and chose the Asia-Pacific subcommittee at the Congress.

Lee: In the meantime in Asia, there have been continued efforts to develop a regional community to build closer ties within Asia.

Bereuter: There is a need for the United States to actively support the Asian effort to develop a regional community. I think it’s important that the United States is not seen as unappreciative about that. It’s natural that Asian countries are trying to form regional organizations among themselves, and often times, we hope, on the other side of the Pacific, that this would be an Asia-Pacific kind of activity.

Lee: Now, about the alliance between Korea and the United States: Let’s first tackle the free trade agreement issue. After very difficult negotiations, we had the agreement, but in both countries, it’s not easy to pass it in the legislatures. For the United States, this will be the first free trade agreement with an Asian country and the biggest FTA since the North American Free Trade Agreement. So there are both concerns and expectations.

Bereuter: We have to pay attention to the fact that there is an element of protectionism in the United States, as many jobs are lost in the industrial sectors and many candidates running for office are very negative ? or at least not supportive ? of the trade agreement. It is unlikely to see progress in the U.S. until a new Congress is formed and a new president is in office. I think both presidential candidates are intelligent, rational men, and I think they are going to see the advantages to both countries and to our role in Asia. But, frankly, there is a paralysis related to protectionist sentiment in the U.S. and it means that it’s not going to pass until a new Congress is formed and a new president is there. But it is something that has been worked on carefully by both parties and ultimately, rational decisions will be made.

Lee: The free trade agreement between the United States and Colombia is also pending.

Bereuter: That’s true. The fact that this is pending should give some insight to Korean people that this is a general problem, not a problem with Korea.

Lee: Now, regarding the North Korean nuclear issue, it’s true that the six-party talks have seen some progress, yet there are still concerns whether Pyongyang would completely put an end to its nuclear project. What is your perspective about this?

Bereuter: Well, we know how difficult it has been to negotiate agreements of any kind with North Korea, and South Koreans have been very patient and actually generous. There is skepticism throughout the world whether North Korea would ever give up its nuclear ambitions, but the talks are worth proceeding, and I hope that the six-party talks would eventually expand into other political and social areas. I think it’s good to have such a forum. One thing we have to always worry about is that this issue should not be a divisive point between Seoul and Washington. We don’t want to give the impression of marginalizing the Republic of Korea in this important issue.

Lee: One concern is that one way or another, Pyongyang would succeed in retaining even one or two bombs, as it would bring very serious consequences in the balance of power. Washington, Seoul and Tokyo have to cooperate very closely and work together with China.

Bereuter: I have no doubt that they will. Also, the positive role that China has played in this issue should not go unmentioned. It’s been important.

Lee: What is your perspective on the Seoul-Washington alliance?

Bereuter: Korea is our key ally, and an example of how a country can dramatically develop itself with democracy. I think that the military relationship will, at least within Korea, change, as American forces are more likely to have a larger share of their capacity in Guam under the American flag, than those based directly in Korea and Japan. There is some sense of confidence in that by doing so, we are not providing some unnecessary aggravation to relationships with our key allies like Japan and Korea. So the military forces balance on the ground in Korea is likely to change, and it should not be seen as threatening to the security of the people of Korea. It’s a natural evolution.