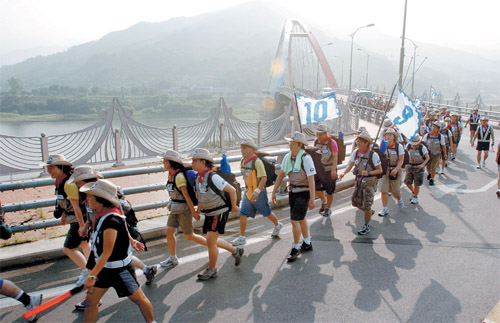 Trekkers on a walk sponsored by Dong-A Pharmaceutical last year cross Namdo Bridge, which joins the Gyeongsang and the Jeolla provinces.[JoongAng Ilbo]

The students looked shattered but relieved when they reached the finishing point at City Hall Plaza, central Seoul, last Wednesday.

The other 17 dropped out along the route, either through exhaustion or because of the heat, or both.

It wasn’t just the walkers who were thankful the odyssey, sponsored by LIG Insurance, was over.

A trekker with a member of the support team on the LIG Insurance walk this year. Provided by the organizer

“I haven’t had a wink of sleep since my daughter left for the trek,” said Hong Jung-hee, the mother of Park Yoo-jung, a 21-year-old participant.

Her fears were compounded when news broke during the first week of Park’s trek that a walker had died on a long-distance walk organized by another company.

Seo Yu-jin, a 22-year-old female student, collapsed and died of heatstroke on July 7 in Sinwon-ri, a town in Gyeongju, South Gyeongsang.

Seo was on an 1,133-kilometer-long test of endurance organized by Dong-A Pharmaceutical and was heading for Seoul.

The temperature the day Seo died hit 36.4 degrees Celsius (97.5 degrees Fahrenheit) and the meteorological agency had issued weather warnings for that area.

Five others on the Dong-A Pharmaceutical walk were taken to hospital the day Seo died suffering from dehydration. They had all walked more than 20 kilometers that day in the heat.

What’s surprising about the walk organized by Dong-A Pharmaceutical, one of the nation’s largest cross-country treks founded in 1998, is that it wasn’t called off.

According to the Ministry of Education, Science and Technology, schools close when the temperature reaches 35 degrees Celsius for two consecutive days.

The Ministry of National Defense says it suspends outside drills and takes measures to ensure soldiers remain hydrated when the temperature reaches over 32 degrees Celsius.

“Seo’s body temperature was 43 degrees Celsius when she died and her feet were very blistered,” said Jung Young-hun, the detective investigating the circumstances surrounding Seo’s death.

“But the trek continued,” he added.

Dong-A Pharmaceutical said all would-be participants underwent a physical examination as part of the selection process prior to the walk.

Ten students failed to meet the required health conditions, according to the company.

But there has been criticism that the hikers on the Dong-A walk didn’t have enough breaks.

“It is common sense that the trek should stop in the afternoon in such heat,” said Kim Ji-young, who has participated in two cross-country treks.

“It is a general rule that the team is allowed an afternoon rest between lunch and mid-afternoon when the sun is at its strongest. Otherwise, walking in such heat could lead to fatalities,” Kim said.

The trip organized by Dong-A Pharmaceutical is one of the nation’s largest cross-country treks. It’s been going since 1998. There are around 40 similar walks every summer organized by large enterprises, students and religious groups.

Companies like LIG Insurance and Dong-A Pharmaceutical get involved for a number of reasons. They want to raise money for charity, build their image and associate themselves with a youthful activity.

“Cross-country treks are a self-promotion exercise for companies,” said Lee So-hee, the chief instructor of a student-led trek team whose 19-day journey starts tomorrow. “Organizing a youthful and challenging event allows companies to promote their image.”

But Lee says she finds it heartbreaking to see the steps students take to help promote the company, as if “the cart is put before the horse.”

“We [student-led treks] rule out any kind of commercialism,” she said, saying that student-led walks are less rigorously micro-managed. A sick student is freely allowed to visit the hospital and a thirsty student can drink water at any time, she said.

However, rules for treks organized by companies tend to be stricter.

Sohn said that tight rules are a necessity otherwise there would be no point to the event. Trekkers are encouraged to keep on walking through heat and rain since the whole point is endurance.

“We [Dong-A Pharmaceutical] express our deep regret to Seo’s family,” Sohn said. “The death caused by heat happened all of a sudden.”

It was the first time somebody died while trekking across the country in a program, Sohn said.

There are no plans to cancel the annual Dong-A Pharmaceutical walks, though.

“Since the trekking program enjoys a long history, it will continue and not disappear,” Sohn said. “But nothing has been decided yet regarding the changes to improve marching conditions and rules.”

Kim Ji-young said she is surprised that no one has died before.

“Though the participants are young, it’s not easy crossing 1,126.8 kilometers in 20 days,” she said.

The Gyeongju police said Dong-A Pharmaceutical didn’t violate any rules and no legal action has been taken against the company in relation to Seo’s death.

Sohn feels justified because the company had prepared the necessary safety precautions, he said.

The support team consisted of 100 members of staff, many of whom had helped with organizing treks and had experience giving first aid.

There were also three ambulances, one doctor from Severance Hospital and two nurses on standby.

However, the sheer scale of these marches make safety an issue.

“It is impossible to look after a team member since there are so many other students [trekking],” said Ryu Seung, a professor of emergency treatment at Chungnam National University in Daejeon.

The police appear satisfied with these measures. “Emergency care was administered at the scene right away,” Jung of the Gyeongju police said.

“It’s sad to say, but the incident was triggered by the unyielding spirit of youth. Seo had to finish the trek no matter what,” the police officer said.

Bae Jung-yeon, who trekked from Jinju to the Imjin River five years ago, explains why.

“There is a great sense of achievement [finishing one of these organized treks],” she says. “The spirit of a challenge is unyielding for young people.”

Students take up the challenge because finishing one of these treks looks good on a resume.

“I applied for my first trek because I lacked personal experiences on my curriculum vitae,” Kim said.

She is now working at a large electronics company she had wished to enter, and she thinks the item on her resume referring to the trek might have helped her job application because it shows she had endured a great struggle.

“Scholarship isn’t all about studying,” said Oh Jae-dong from the university’s students department. “Leadership is also one part and students learn much while trekking.”

These factors explain why getting on to one of these treks is so competitive, and the shy participants push themselves so hard.

Last year, 11,516 students applied for a 21-day trekking trip organized by Dong-A Pharmaceutical. Only 144 applicants were selected, meaning that only one in 80 went on the 600.5-kilometer march.

The ratio has risen drastically compared to 1998 when the trekking program first started. That year, one out of 29 students was selected.

Bae said that treks have become too commercial and that it would be better if people participated simply for themselves rather than as a means of boosting their resumes.

“If a participant has no choice but to continue the march if the trek is career-driven, the march becomes irrational,” she said.

“That means the cross-country trek doesn’t reflect the spirit of youth but a career-driven society instead.”