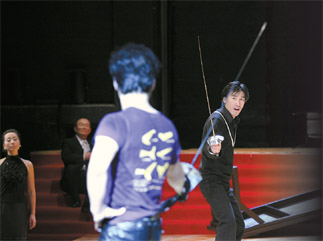 Actors rehearse for a production of “Hamlet” at the Suwon Hwaseong Fortress Theatre Festival. Provided by the organizer

A new outdoor location has been selected as the stage for performances at this year’s Suwon Hwaseong Fortress Theatre Festival.

Hwaseo Park is a popular destination for locals, heavily populated with pine trees and located near the west gate of the fortress, known as Hwaseomun.

Visitors to the festival, now in its 12th year, will have the chance to see straight theater, musicals, new circus and other outdoor productions against this dramatic backdrop.

Theater companies will be jetting in from as far afield as Bulgaria, Italy, Australia, Belgium, Russia and Finland for the festival, which takes place from Aug. 15 to 24.

One of the overseas invitational pieces is August Strindberg’s “Dance of Death.”

This is a Bulgarian production by the nationally funded Sfumato troupe, an award-winning group of actors with more than 200 overseas performances to its name.

The Italian production is a musical called “Waltz,” and there’s an Australian black comedy called “If You Tease FUTZ.” The two pieces are to be performed by Teatro Tascabile Di Bergamo and Tropic Sun Theater, respectively.

The National Dance Company of Korea is staging “Hamlet” and will be directed by Jens-Daniel Herzog.

The Herzog production was performed at the National Theater of Korea last November.

Suwon Hwaseong Fortress has been a Unesco World Heritage site since 1997.

The history of the castle is almost as dramatic as some of the shows that will be performed at the festival.

The prince is thought to have had mental health issues and his disappointed dad apparently ordered him to seal himself in a rice chest.

Sado followed the order and suffocated to death. The diaries of his wife, Lady Hong, published as “The Red Queen,” chart Sado’s descent into madness.