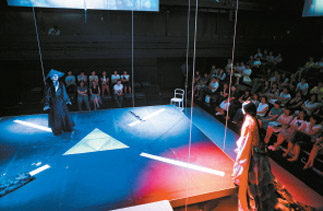 A scene from off-Broadway musical “See What I Wanna See” at Seoul Arts Center. Provided by the organizer

The truth is out there, but there are many different ways of seeing it.

Michael John LaChiusa tackles this idea in “See What I Wanna See,” an off-Broadway musical currently on at Seoul Art Center’s Jayu Theater.

“See what you want to see from the musical,” said Ahn Sam from Musical Heaven, the Korean production company.

“As the stage is open on all four sides, the musical offers different interpretations depending where you sit,” she said.

In this story, the witnesses to a rape and murder have differing views on what actually took place.

“[LaChiusa] has tried to escape from commercial and conventional musicals,” Ahn said.

He wrote in the 2005 August issue of Opera News, an American monthly opera magazine, that big-scaled productions are “mechanical” and that “there is no challenge, no confrontation and no art.”

“The Korean musical industry is overflowing with conventional Broadway shows, which can make Korean audiences fed up,” Ahn said.

“See What I Wanna See offers a new perspective.”