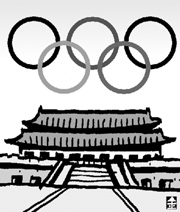 There is a boulevard that runs through Beijing that took its name from the capital of the Tang Dynasty, Chang’an.

Unlike other city streets, parking is not allowed along this road. One must pull into the side streets to be able to park. Chinese leaders and foreign V.I.P.s use the road, too. The authorities often close down one or two lanes to allow high officials to pass through speedily.

Citizens’ inconvenience is of no concern. The mentality is that any sacrifice is justified, to allow for smooth traffic between Zhongnanhai, where Chinese leaders live, and Tiananmen Square, which serves as the headquarters for the Communist Party.

The Beijing Olympic Games are being run in such a way. Everything is being done for the sake of the Olympics. The city of Beijing has changed a lot in only a year.

A river called Liangmahe in the east of the city, was always polluted. It stank so badly that people tried to avoid it. However, the Olympics have changed the river as well. It has been ecologically revived and is now full of clean water with wild grasses growing on its banks.

This is the result of China having invested around $29 million a day on average to reshape the city after having been selected in 2001 as the host of the 2008 Games.

How the 90 heads of state watched the opening ceremony was interesting. The nine members of the political standing committee of the Chinese Communist Party were wearing suits on the hot summer’s night, yet watched the ceremony looking remarkably cool. In contrast, the foreign heads of state, gathered behind in a corner, were fanning themselves in the heat.

Some even said, “It looks as though the foreign leaders are paying tribute to the ancient Chinese emperor.”

Everything here is done the Chinese way. Whether it is the closing off of Chang’an Avenue or changing the city’s look by splashing a huge amount of money over it for the Games, it is the same mentality. Under the belief that it is the representative of Asian civilization, inviting leaders from abroad and having them sit in one corner is the Chinese way of expressing its self confidence.

We should wait and see whether the Beijing Games will succeed after being run in such a manner. After the Games we will see if the Liangmahe River continues to be clean and how the strict control shown on Chang’an Avenue will affect the present joy of the Chinese people.

Only then can we judge whether the Beijing Olympic Games were a real success.