Murder most foul in a low-key tale

Murder most foul in a low-key tale 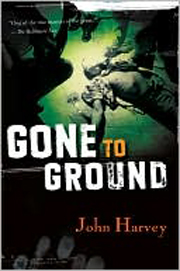 A homosexual film studies professor called Stephen Bryan is battered to death in his bathroom.

The police suspect the killer was a former lover or perhaps a one-night stand that went tragically wrong.

Detectives Will Grayson and Helen Walker pursue a line of enquiry that favors a scenario in which spurned lover Mark McKusick attacked Bryan.

But the academic’s sister, a radio journalist, suspects that her brother may have been silenced by a powerful local real estate broker.

Bryan had been researching the life of 1950s film star, Stella Leonard, who died in a mysterious car accident, and his stubborn sister Lesley suspects the Leonard family has something to hide.

Sounds like pulp fiction? Perhaps, but John Harvey, the author of “Gone to Ground,” is considered by his peers and critics to be one of Britain’s most accomplished writer of police procedural novels.

A poet and a playwright, Harvey’s prose is lean and his descriptive passages a delight.

The image of the “ivory lozenge” of a doorbell is one of many prime examples.

What I liked about Harvey ’s detective, Will Grayson, is his anonymity. It was such a refreshing change from the hero-detective that dominates most crime fiction, in particular the British brand.

Characters like Ian Rankin’s Inspector Rebus character and Colin Dexter’s Inspector Morse became household names when the novels were televised. Each detective has his own eccentricities and background story that often bears down on the plot.

No so Grayson. He’s about as ordinary as they come. He’s not fantastically sleuth-like and doesn’t have the intellect to deconstruct cases in the blink of an eye.

He’s not likely to beat confessions out of suspects and he isn’t lusting after his partner, Walker. If anything, he’s rather dull. He’s just a regular guy doing his job.

Such a character would normally render most novels too dreary to finish, but Harvey’s tactic is to make the female characters, Walker and Lesley Bryan, the real stars.

And if you read this genre, you’ll know that strong female characters are rare. Walker , in particular, is the kind of detective you’d want in your squad. In one scene, the chain-smoking Walker wades into a pack of brawling drunks about to lynch two men they think are gay.

Walker gets stabbed for her troubles and almost dies, but recovers to help solve the case.

Meanwhile, Lesley is fearlessly taking on Howard Prince, the relative of Stella Leonard, because she is convinced he had something to do with her brother’s death.

The threat of violence hangs in the air every time Leslie confronts Prince, and you’re never sure whether or not Leslie will emerge unscathed.

Harvey’s dialogue spits off the page and with a dramatist’s ear for the humdrum colloquialisms of everyday talk, the author can turn a breakfast table squabble between Grayson and his wife into a tense standoff worthy of a Sam Shepard play.

But I didn’t like the use of the film script device, though. Harvey uses scenes from a film that perhaps Stephen Bryan or his sister wrote about Stella Leonard.

It’s supposed to illuminate the main story in the novel, but I found it too obscure and skipped most of those pages.

This isn’t a novel filled with suspense and derring-do; it’s more a slice of life where the drama lies in the interplay of the central characters.