One man’s love for his purebred chickens

One man’s love for his purebred chickens 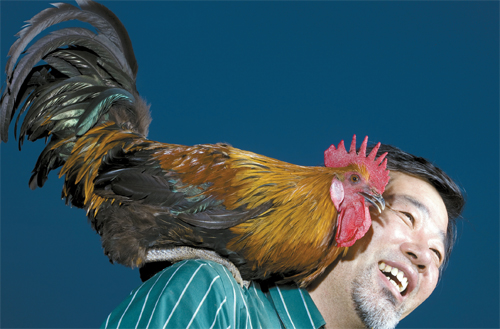 Jung Tae-han, a tojongdak breeder and restaurant owner, poses for the camera with one of his chickens. By Kwon Hyuk-jae

It’s not just hanwoo, Korean-bred cattle, that Koreans value as their domestic breed. The nation also holds a special place for tojongdak, a purebred Korean chicken.
One of the country’s foremost tojongdak experts is Jung Tae-han, 54, who has been working tirelessly over the years to breed domesticated fowl that is, in his view, purely Korean.
Jung said his fascination with chickens started when he was young. His father was the principal at agricultural high schools in several cities in North Jeolla, and Jung has fond memories of watching the hens and roosters pecking for food in the school grounds.
One treasured memory has never left him. He remembers watching a hen lay an egg in his hand, an experience so surreal he spent more time with the animals, watching their behavior and listening to their clucking.

Noting his son’s interest, Jung’s father explained that the number of imported chickens in Korea was increasing in the late 1960s. Modernity was starting to replace tradition as Koreans looked for ways to improve their living standards, his dad said.
Jung’s father sat the young Jung down and expressed his discontent at the new trend, saying that Korean breeds would decrease over the next 30 to 40 years, and that if people bred Korean animals in the future and marketed it right, they could enjoy a successful business venture.
Jung was too young to understand his father’s message at the time, he said. Only after years of career detours - he was a teacher for a brief stint, an assistant to an assemblyman and a businessman - did Jung follow his calling.
Jung’s foray into the chicken business started in October 2002 when he closed his bibimbap restaurant in Incheon, Gyeonggi, and headed south to Maryeong, Jinan County in North Jeolla. His aim was to restore stocks of the depleted Korean chicken breed and market what he believes to be its superior meat quality. 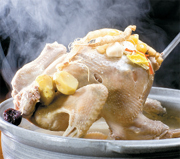 Tojongdak served at Maryeo Nongjang, (02) 3445-9902, is simmered for 100 minutes so customers need to make reservations. All the food, including vegetables, are from Jung’s farm.

Demand for safer quality food was on the increase at this time, and Jung knew that chickens from outside Korea tended to be bigger and capable of producing more eggs.
But he said he firmly believed in the superior quality of meat from the Korean breeds.
Jung started by building a makeshift shelter on a mountainside property in Maryeong and divided it into 40 equal spaces. Having drawn up a rough plan for the future, he headed out in his four-wheel drive truck in search of chickens to fill his farm.
He scoured the corners of the country, shuttling from Mokpo in the southwest of the country to Jeju Island and Japan and Mongolia, but most trips ended in disappointment, he said.
The problem was finding what he thought were true Korean breeds. Many farmers raised cross-breeds but claimed they were purebreds, he said.

Jung said he used to try to explain to farmers the difference, but the ensuing arguments taught him to keep his mouth shut and his eyes peeled.
The only places where Jung was able to find what he was looking for were at farms and mountainside dwellings in remote areas. He found people who had raised pure Korean breeds since the end of the Korean War. However, the ill effects of inbreeding were visible, he said.
The difficulties Jung faced combined with the miserable winters in the mountains made the budding farmer want to pack his belongings and head back to the city, he said.
But he persevered and eventually got his hands on what he believed to be 380 pure Korean-bred chickens. To categorize his stock, he divided 200 of his best chickens into five groups according to distinct physical qualities and traits. By breeding the groups, he thought he would be able to produce superior meat.
Jung was financially strapped at this point and it took him three more years to expand the five categories to 11.
At this time, Lee Chul-seung, the 86-year-old retired assemblyman for whom Jung had worked before turning to chicken farming, visited Jung’s farm.

Lee, who had given Jung the land to breed tojongdak, tasted a bowl of chicken soup made from Jung’s birds.
“Tae-han,” Lee said, savoring the flavor, “this tastes like the soup my mother cooked before I was forced into the military during the Japanese occupation. I don’t think I can eat chicken soup again anywhere else.”
Gaining strength from Lee’s encouragement, Jung expanded his business in 2006. He now has over 20,000 tojongdak on his farm.
The benefits of tojongdak, Jung says, are taste and safety. He knows exactly how the chickens are raised and he does his best to ensure an organic upbringing, he said.
In Jung’s opinion, a lot of the food people eat today is not safe. Artificial additives and chemicals in the food chain create health problems in humans, he reckoned.
“Girls just over the age of 10 reach menarche and boys are bigger and taller than ever,” he explained. “Parents are often happy to see early growth spurts in their children, but many don’t realize that endocrine disrupters [hormonally active agents] in food are a big reason for those [physical] changes.”

To create a safe environment, the coop on his farm is covered with 30 centimeters of loess and straw. The chickens roam freely and their waste naturally breaks down in the loess and straw, freeing the farm of the unpleasant odor that pervades most chicken farms.
Jung also claimed that he does not medicate sick or weakened chickens, preferring to let the birds heal naturally by giving them plenty of time and food.
They live off beans, corn, half-crushed rice, wheat and rice bran plus organic feed from nearby Gimje and the surrounding farmland.
His work has been recognized. The Livestock Research Institute of National Agricultural Cooperative Federation tested his chickens last August for evidence of harmful chemical substances. The results came back negative.
In addition, he received the Certificate of Environment-Friendly Products last November from the Jinan branch office of the Jeonbuk National Agricultural Quality Management Service, North Jeolla.

Confident of his product and with the accreditation supporting his claims, Jung prepared to open a chicken soup restaurant in Nonhyeon-dong, southern Seoul, in April this year.
Things nearly went awry when a case of avian flu was reported in Gimje, North Jeolla, near Jinan where Jung kept his farm.
Luckily, the chickens on his farm in Jinan were unaffected by the virus and the subsequent mass culls of chickens and ducks, and on May 6, Jung opened Maryeo Nongjang, a restaurant specializing in chicken soup.
The menu, which is not cheap, includes samgyetang (chicken broth with ginseng and other ingredients) for 60,000 won ($55.74), which is almost 10 times the usual price; baekseok (chicken boiled in plain water with garlic with salt and green onions for seasoning) for 200,000 won; and yongbongtang (carp and chicken boiled soup) for 600,000 won.

Avian influenza was still playing on people’s minds and customers had misgivings about paying such high prices for chicken dishes, but Jung forged on.
Eventually, recognizing the quality of Jung’s chicken, customers began to fill his restaurant.
More good news came in July, when one of Korea’s premier department stores, Galleria in Apgujeong, southern Seoul, decided to stock its shelves with his tojongdak.
Jung said he does not see his latest success as the end but as the beginning toward creating new avenues for the Korean-bred chicken to branch out to a global market.

How exactly do you define tojongdak?
There are no strict definitions for the traits that define tojongdak, but Jung Tae-han firmly believes that purebred chickens in Korea that are not mixed with breeds from outside the country should be referred to as tojongdak.
However, others in the business refer to the mixture of pure Korean breeds and non-Korean breeds as tojongdak. Others refer to the Korean chicken breeds from the pre-Japanese colonial era as jaeraedak (native) and those chickens mixed with jaeraedak and non-Korean breeds as tojongdak.
The issue is debatable, but there is no clear-cut standard to judge such matters. The lack of sustained research on the topic has prevented an agreed-upon definition.
Kang Bo-seok of National Institute of Animal Science said Korea should follow a system similar to that used in Japan.
“There, chicken with 50 percent or more of a Japanese breed mix is considered a Japanese breed. Korea also needs a system to distinguish breeds,” Kang said.