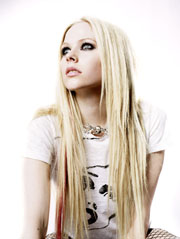 Canadian pop star Avril Lavigne will be rocking out with her fans in Korea next week.
Lavigne will be performing in Korea, as part of a world tour promoting her latest album “The Best Damn Thing.” It will be her fourth Korea concert since her first visit in 2002.
“It [will be] the best show I put on in my life and in my career, so I feel really confident about the show. It [will be] very fun and very upbeat,” Lavigne said in a recent phone interview with the Korean media.
Lavigne took the pop world by storm in 2002 at the age of 17 with her debut album “Let Go.” The album sold 16 million copies around the world, 270,000 of them in Korea.
With two more successful albums under her belt, “Under My Skin” (2004) and The Best Damn Thing (2007), Lavigne says having more singles allows her to organize better performances.

“Because I’ve made three records, I get to pick all the strongest songs and put together exciting shows.”

Lavigne said her latest album features fast, upbeat songs, and the theme is about not being too serious and just having fun.

The album opener “Girlfriend,” for instance, was recorded after she hummed to herself a simple, playful melody: “Hey hey, you you, I don’t like your girlfriend,” which became the catchy main chorus of the song.

Fun is exactly what Lavigne would like to present to her Korean fans at the upcoming concert.

“A lot of people don’t get up [during concerts] and I’m one of the few artists that get [audiences] to do that. I think Korean fans are a lot of fun and I think they enjoy music,” Lavigne said.

Lavigne will also perform in the Philippines, Taiwan and Japan after her Seoul show.