The aides who run government

The aides who run government 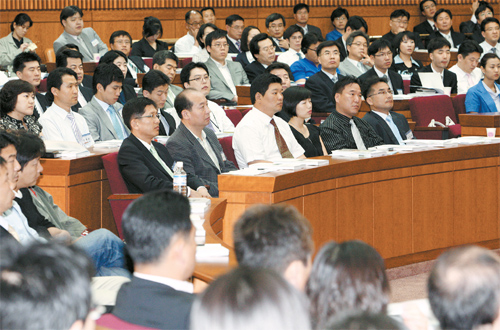 As the National Assembly busies itself at the start of its first regular session, setting up committees and generally getting down to business, it’s not only lawmakers who are engaged with the demands of the day.

Thousands of aides working for the lawmakers are equally engaged. 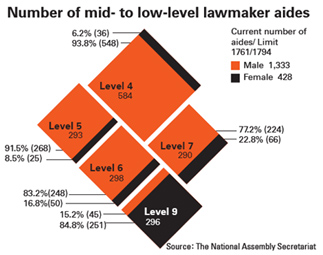 A job as an aide was once thought to be a good way of getting a seat at the National Assembly. The position was a kind of stepping stone to higher office.

Many lawmakers at the last National Assembly election were once aides, for example, Cha Myeong-jin, a spokesperson for the Grand National Party. 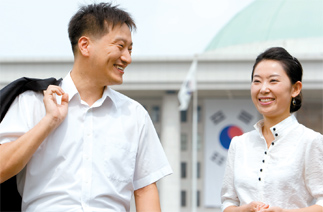 Jeon Jeong-bae, left, and Jo Jin-ee who got married in December last year are both aides for lawmakers. Jeon is an aide for Grand National Party lawmaker Kim Young-seon and his wife works for lawmaker Ryu Keun-chan of the Liberty Forward Party. [JoongAng Ilbo]

However, people in the National Assembly say that the nature of the job has changed. Nowadays, aides are considered more as professionals rather than as wannabe lawmakers.

Lee Mun-yong, an aide to Grand National Party lawmaker Shin Seong-beom, says the job is viewed these days just like any other profession.

Changes in the way people view the job of an aide have also led to changes in values and virtues.

One is political loyalty. “The Democratic Party lost half its seats [at the last election], so many aides switched to the Grand National Party, but there hasn’t really been any criticism,” Lee said.

That’s why the aide associations of the Grand National Party and the Democratic Party are discussing merging the two groups. In addition, Sogang University’s Graduate School of Economics has recently launched a special course for lawmaker aides on the theories and practice behind the job.

Ko Seong-hak, 50, the chief aide of political affairs for the chairman of the National Assembly, Kim Hyong-o, is considered the godfather of aides, having served for more than two decades.

“Many people ask me why I have remained as an aide for so long, but I think I have exploited a new era for aides as true professionals,” Ko said. “We need professional aides.”

Nevertheless, few aides have remained in the job as long as Ko, much less stayed with one lawmaker as he did.

First time lawmakers prefer veteran aides who know the inner workings of the National Assembly and can navigate their way around the complex political landscape. Such experience is invaluable for newly minted lawmakers trying to maneuver their way through the political jungle.

That is why Lee Min-gyeong, 51, an aide to Grand National Party lawmaker Son Byeom-gyu, has served seven first-time lawmakers since 1988.

While lawmakers’ careers hinge on election results and the political climate, some long-term aides have weathered the dynamics of the political world. The longest serving aide is Ko Young-dae who, with 27 years experience under his belt, works for Democratic Party lawmaker Choi In-gi.

Experience isn’t everything, though. Lawmakers also favor aides who can help establish policy, while aides who have worked for lawmakers on standing committees for a long time are held in high esteem.

Such expertise comes into play when lawmakers audit the administration every fall. Government organizations bracing themselves for inspection usually go straight to the aides for the information they need to prepare for the audit, since the aides do most of the paperwork and research.

Another way for an aide to get recognition is to come up with ideas that make the headlines during an audit.

An Jang-ho, aide to lawmaker Choi Gyeong-hwan of the Grand National Party, collected vital information from the Financial Supervisory Service and from internal documents belonging to the Korea Exchange Bank when lawmaker Choi raised questions regarding the sale of the bank at a hearing during the 17th National Assembly term.

The case was picked up by the prosecution and eventually made its way to court. Choi was on every front page and led the TV news. “I read the newspapers very carefully and start to investigate cases that seem to be fishy. Usually it works,” An said.

Lawmakers are entitled to six official aides and two unpaid intern aides. The chairman of the National Assembly can have as many as 21 aides, while the vice chairman commands up to 10. The total quota for aides stands at 2,400, but the number is usually lower due to firings and vacancies. The right to fire and hire aides lies entirely with the lawmakers.

Once an aide gets into a lawmaker’s office it’s not easy to get an upgrade in pay and status. The existing crew is already in place and it’s often a vacant position being taken.

That’s why aides try to get a higher grade when moving to a different lawmaker’s office. The lowest pay for an aide is about 24 million won ($22,000) while those who serve more than 20 years are eligible for pensions.

The number of female lawmakers is increasing but there are not too many at present. They are mainly concentrated in the lower ranks, mostly working as secretaries.

In addition to preparations for audits, aides are also responsible for maintaining Web sites and accompanying lawmakers to official functions.

If you want to be an aide, you need to either know someone on the inside, since many appointments are carried out privately, or you need to look out for public announcements. It’s worth pointing out that aides have little job security. If your boss loses his seat at an election, you will also lose your job. At the last National Assembly election, 500 aides to Democratic Party lawmakers lost their jobs.

Lawmakers also fire aides when they feel their aides fail to deliver and make them a star at government inspection hearings. Word gets around, though, and aides tend to avoid lawmakers with a reputation for dismissals.

As job security is relatively low, aides prefer their spouses to have stable jobs such as teachers, but some in the profession prefer relationships that grow in the office.

Jeon Jeong-bae and Jo Jin-ee got married in December last year. Jeon is an aide for Grand National Party lawmaker Kim Young-seon, and his wife works for lawmaker Ryu Keun-chan of the Liberty Forward Party.

“Usually we prepare the speeches for them [the lawmakers] but at our wedding they prepared their own speeches,” Jeon said. Both lawmakers officiated the wedding and call themselves in-laws.

“Most females would not understand this lifestyle. But when I tell my wife abruptly that I have to cancel our dinner she only asks, “Did the lawmaker come?” Jeon said.

During audits, the couple know what to expect of their spouse: late nights, little sleep and high stress.

An understanding “aide” at home must be a help.