Breaking the ice with the Arctic community

Breaking the ice with the Arctic community 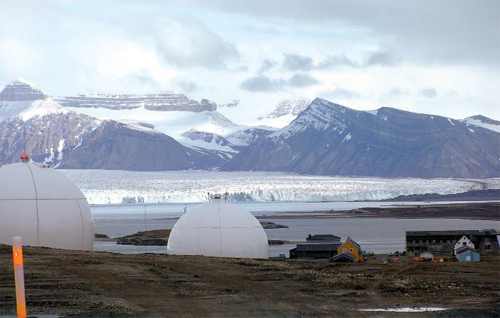 The Ny-흈esund research facilities located on the Svalbard Archipelago. Provided by the Korea Polar Research Institute

When President Lee Myung-bak took office, one of his main policies was to secure natural resources for a country that was heavily dependent on energy imports.

In line with the country’s overall policy, a small delegation of officials embarked on a trip to the North Pole, an area that is becoming increasingly important for the development of potential resources.

Adding to the rising importance of the area is global warming, which might create new sea lanes that could reduce the time ships take to transport goods around the globe.

After an 18-hour flight that started in Frankfurt, the delegation landed at Korea’s Dasan base, part of the Ny-Alesund permanent research facilities located on Svalbard, an archipelago that falls under Norwegian sovereignty and is one of the world’s most northerly settlements. 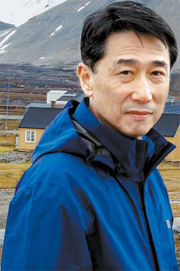 Oh Joon, the Foreign Ministry’s director general in charge of multilateral, global and legal affairs, is the first Korean diplomat to set foot on the Dasan base at the Ny-Alesund research facilities. [JoongAng Ilbo]

The team was led by Oh Joon, the Foreign Ministry’s director general in charge of multilateral, global and legal affairs.

Oh became the first Korean diplomat to set foot on the facility, and for good reason.

According to the U.S. Geological Survey, an estimated 90 billion barrels of oil and 47.4 trillion cubic meters of natural gas lie in this area, which experts say comes to 13 percent and 30 percent of the world’s untapped oil and natural gas reserves, respectively.

Added to the fact that the area is home to 37 percent of the world’s total fish population, it is only natural that nations from around the world are sending their scientists to explore the vast possibilities that the area offers.

The Ny-Alesund compound is located in the most accessible region of the Arctic, making it a prime spot to monitor global environmental changes and a natural research laboratory.

Here the issue of global climate change has increasingly stepped into the spotlight and occupied the interest of researchers.

Yun Young-jun, a researcher who worked at Korea’s science facility, said that the changes in the area’s climate are more tangible than in recent years.

“The glacier has melted so much that the area has moved 1 kilometer [0.62 miles] inbound from the water.

“In addition, the average summer temperature at the North Pole has increased by three to four degrees Celsius,” Yun said.

Oh points out that the speed of climate change has alerted scientists and governments alike.

“Even with global climate change in process, people used to think that new sea routes and natural resources would only be possible at the end of the century,” Yun said.

“The situation has changed and we predict that these issues will become the real thing within the next 30 years.”

Experts say that if such a reality kicks in, the new sea lanes created will have a huge impact on the logistical picture around the globe.

“During the summertime when the glaciers melt down for two months and new sea lanes surrounding the North Pole open up, this new route [across the Arctic Ocean] will be shorter by 6,000 to 8,000 kilometers than the Asia-North America route and Asia-Europe one,” said Seo Hyeon-gyo, a senior researcher at the Korea Polar Research Institute.

While there seems to be no shortage of motivation for Korea to take a more proactive approach in exploring the area, the complex international picture at the North Pole is calling for swift diplomatic maneuvering.

Currently, the area is administered by the Arctic Council, which consists of eight member nations.

The council was established by the Ottawa Declaration of 1996, which called for a high-level intergovernmental forum to provide a means for promoting cooperation, coordination and interaction among the Arctic states, regarding a sustainable development and environmental protection in the Arctic.

Member states are Canada, Denmark (including Greenland and the Faroe Islands), Finland, Iceland, Norway, the Russian Federation, Sweden and the United States.

Korea is a member of the council’s science committee, but experts and officials say that such a position does not give the country enough information on overall development and vital policy issues surrounding the area.

This is why the country is trying to gain observer status in the council, which is granted to non-Arctic states but requires a country’s ability to display its interest and research capability.

In that regard, Korea hopes to make strides with an icebreaker ship, which is expected to set sail in October 2009.

Dubbed the Araon and built by Hanjin Heavy Industries and Construction, the 7,000-ton ship will have a crew of 85 - 60 of whom will be scientists.

The ship will be capable of breaking 1 meter of ice at a speed of three knots, opening new venues to explore.

“Without an icebreaker, it’s impossible to conduct scientific research in the Arctic,” said Jin Dong-min, director of the research institute. Council members have their own icebreakers and sometimes lend theirs to Korea, but under such circumstances, research is limited.

Scientists at the Dasan base are limited in what kind of research they can carry out because they lack a moving vehicle.

In order to boost its scientific research, the country is planning to establish a joint research center with Canada, probably at Resolute Bay near an existing research facility.