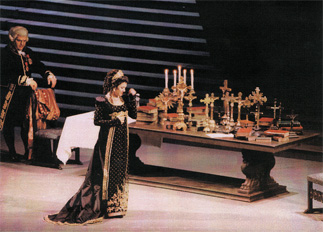 In celebration of the 150th anniversary of Puccini’s birth, “Tosca” will be staged in Korea this month. Provided by the organizer

There are figures in the history of performing arts who were so talented that their names are immortalized - we honor their lives and works that transcend time and place as well as ideologies and cultures for decades, even centuries, after their deaths.

As the world celebrates the 150th anniversary of the birth of the Italian composer, various productions around the globe are rushing to present their versions of Puccini favorites such as “La Boheme,” “Tosca” and “Madama Butterfly.”

In Korea this month, a new interpretation of Tosca will be staged, one that dreams of merging the past with the future in telling one of history’s most popular tragedies.

“Tosca has something to elicit the passions of almost every audience: love, art, politics, religion and death,” said Joseph Franconi Lee, stage director of the new production of Tosca to be presented by the Go-yang Cultural Foundation.

A New York native, Lee has worked with maestro Alberto Fassini in major opera productions in Europe. “The popularity of Tosca can be explained by an incredible Puccini score, which links the passage of 19th century opera to 20th century musical theater.”

And just like Puccini’s music, the upcoming production of Tosca envisions building a bridge between old and new.

“In many new opera productions in Europe and America, there is often a conflict between traditional and modern conceptual productions. Here in Korea I desire to transcend these conflicting visions of opera production,” Lee said.

The production is also the result of cooperation between the Goyang Cultural Foundation and the Daejeon Culture and Arts Center, which organizers say is unprecedented in Korea. The partnership reduces costs and enhances the network between regional performing arts productions, organizers say.