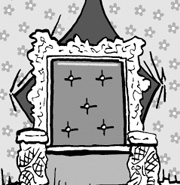 Lord Huan of Qi was one of the five hegemons of China’s Spring and Autumn Period who died wretchedly, unbefitting his great accomplishments while alive. His cook Yi Ya, who once steamed his son and offered it to Huan for dinner, later tried starving Huan to death.

Yi Ya, along with other counselors, built a wall around the ruler’s bedroom, claiming it was by Huan’s instruction, and controlled the entry to the bedroom of everyone in the palace and thus monopolizing power and acting in his stead.

Lord Huan subsequently died soon after, and it is said that he was left unattended for 67 days after dying. There were rumors afterwards that his five sons didn’t even know of their father’s death and were fighting to gain power, destabilizing the dynasty.

Qin Shi Huang who was the first ruler to unify China, was called “grandfather dragon” - a title that symbolizes a king. Shi Huang was plunged into despair after hearing that a meteorite was found where it was written, “The grandfather dragon will soon die.”

Fearing death, he went on five journeys to find medicine that would keep him alive forever. But on his way back from his last journey, he ended up getting sick and died. His prime minister Li Si and chief eunuch Zhao Gao kept his death a secret.

According to rumors, they put marinated fish in his cart to hide the smell of the decomposing body. They continued to receive the servants’ briefings by hiding the cart from view under a canopy, and successfully thwarted King Qin’s will to have his first son Fusu succeed him as emperor.

Emperor Qin’s less favored son Huhai, who used to accompany his father, became emperor with the help of Zhao Gao. It is an established theory that this was the catalyst for the collapse of the powerful Qing Dynasty not long afterward.

It wasn’t just Lord Huan of Qi and Qin Shi Huang who suffered such ignoble deaths. An absolute ruler’s remains after death are always kept hidden behind a veil of secrecy, which generally brings about negative side effects. If solutions to a ruler’s physical problems are sought within the bounds of the law, the possibility of a problem emerging would substantially diminish.

The whereabouts of the North Korean leader, Kim Jong-il, who can be regarded as powerful a ruler as past emperors, is of interest to us.

The reclusive ruler’s troubles are not confined to his state only. It is highly worrisome whether the dreadful lack of transparency will spread into a windstorm on the Korean Peninsula.