Top: King Sejong (1397∼1450) Below: A page from Hunminjeongeum, a script that outlines the sounds of the newly created Hangul alphabet. [JoongAng Ilbo]

Language is as much about image and identity as it is about communication.

As you walk down the streets of Seoul, you see a lot of T-shirts emblazoned with English words, and in the United States, professional basketball players sport Chinese character tattoos.

However, you won’t have seen too many international superstars wearing tattoos of Hangul, the Korean alphabet, and it’s unlikely that you’ll see too many T-shirts with Hangul designs on them as you walk through major cities overseas.

One of the few star athletes in the United States sporting a Korean tattoo is Hines Ward, who plays wide receiver for the Pittsburgh Steelers, whose mother is Korean.

But designers are developing a fondness for the Korean alphabet, realizing the business potential. 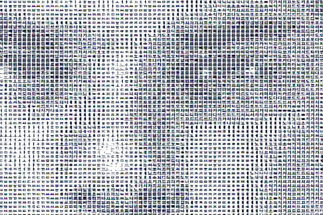 An ad by Daetoo Securities and below, glass frames by Charisma to mark Hangul’s 560th birthday in 2006. [JoongAng Ilbo]

Today, the art of Korean calligraphy is used to promote everything from movie titles to beer bottles. Kyobo Book Store is using shopping bags with Hangul letters emblazoned on them.

King Sejong (1397?1450) would be pleased that the popularity of Hangul is on the rise and that more people wish to express themselves using Korean calligraphy.

Sejong played a key role in developing the alphabet, which was first published in 1446.

He was keen to give the lower classes the opportunity to read and write.

Experts say that the idea of using different calligraphy styles in business has become feasible only in the past decade or so. 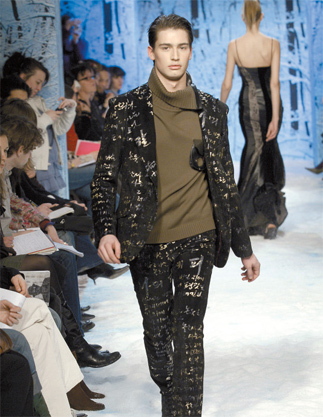 A fashion show by the designer Lee Sang-bong who is using Hangul letters in his clothing designs.

“I think it started with the rise of Korean blockbuster movies in the early 2000s,” said Kang Byeong-in, a calligrapher who runs Sultong, a professional firm that specializes in providing companies and businesses with styles of calligraphy.

Kang said the prevailing practice before the Korean cinema boom was to use computer-generated writing styles. “People didn’t think an idea could be expressed well through Hangul calligraphy,” Kang said.

Lee Sang-hyun, who designed the title graphics for the 2006 movie “Tajja,” said Hangul writing was only used to lend a touch of prestige in the past.

“For instance, it was customary to invite a famous person to provide the calligraphy for a plaque or sign at the entrance of a new hanok [traditional Korean house],” said Lee, who runs Simhwa, a calligraphy design company. “It was more about the name of the writer than the occasion or message expressed through the writing.” 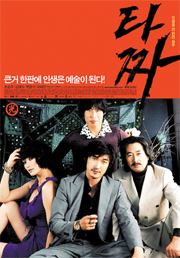 Filmmakers are using Hangul to promote their films. In the past, businesses relied on computer-generated calligraphy. The movie “Tajja” used calligraphy provided by the designer Lee Sang-hyun. [JoongAng Ilbo]

An incident in 2000 seemed to change the way people viewed Hangul.

That year, a court ordered the producers of the 1996 Korean movie “Chukje” (Festival) directed by Im Kwon-taek, to pay 20 million won ($17,300) in compensation to Yeo Tae-myeong, the current president of the Korea Calligraphy Design Association, which was set up in March to standardize the calligraphy business.

The filmmakers had taken two calligraphy letters from a book written by Yeo and used them in the film’s title.

That 20 million won is probably the highest price ever paid for any Hangul writing. Today, design companies and individuals in the calligraphy industry charge a lot less.

“I usually charge about 2 million won or sometimes more for movie titles,” said Yeo, adding that 5 million won was the highest he ever charged.

Yeo said there’s no real standard pricing because of the relatively young age of the business, which is something that the KCDA was set up to resolve.

After a decade of pushing Hangul into new territory, Yeo thinks there are still lots of other areas to explore. “It’s a matter of appealing to people’s emotions.” 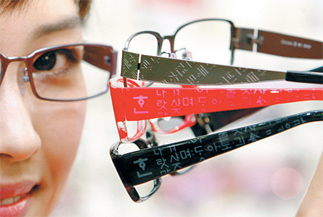 He is certainly right when he mentions emotions.

Nowadays, T-shirts with the slogan “The Dokdo islets are ours!” have been spotted around town, a response to Tokyo’s territorial claim over the Dokdo islets, known as Takeshima in Japan.

But cashing in on nationalism is only a small part of the calligraphy industry.

“Hangul is read and understood immediately [in Korea] but lots of the products that use English are designed just to look or sound foreign,” Kang said. “By the same token, that is why you can see foreigners wearing T-shirts designed with Hangul. It’s all about image.”

Kang added that calligraphers need to create writing styles that differ from traditional styles in order to popularize Hangul. “It’s important to catch the spirit of the younger generation,” Kang said.

Some designers are meeting with a degree of success. Lee Sang-bong has used Hangul patterns several times at fashion shows in Paris. He has also sold lingerie patterned with the Korean alphabet online.

So what is the attraction of Hangul? Why are businesses turning to the 500-year-old alphabet to promote their products?

Some say the alphabet, which consists of 24 letters, including 14 consonant and 10 vowels, is pleasing on the eye.

The consonants are formed with curved or angled strokes and vowels are composed of vertical or horizontal strokes. They also have short strokes on either side of the main stroke to express different sounds.

But even though King Sejong’s greatest cultural achievement is considered to be the creation of the alphabet, Hangul was not widely used by the upper classes until after 1945, when Japan’s colonial rule ended.

Until that point, Hangul was thought inferior to Chinese, which was held in high esteem in this Confucian society.

Seong Gi-ji, an official of the Korean Language Society, says Hangul wasn’t named the country’s official language until the end of the 19th century, but the development and spread of the alphabet was thwarted when Japan annexed Korea in 1910.
The Japanese suppressed Hangul and promoted the Japanese language.

We can also see evidence of the popularity of Hangul by studying the number of non-Koreans taking the Test of Proficiency in Korean, Topik.

The number of test takers has more than doubled compared to last year’s which stood at 72,290.

The rise is perhaps linked to hallyu, the “Korean Wave,” the promotion of Korean TV dramas and music around the region, and the rise in the number of immigrants coming, or planning to come, to Korea.

According to the Education Ministry, the rise in Topik takers is mainly due to increased interest in neighboring countries.

There’s also been steady growth in Mongolia, India and Argentina.

For people like Yeo Tae-myeong, these figures are a positive sign that Hangul is being embraced by surrounding cultures as people are finding ways to make the Korean alphabet appeal more to the younger generation.

“Perception has changed with time. Hangul could have a very high profile if the packaging is right,” Yeo added.