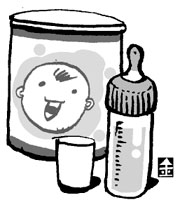 If we take a closer look at melamine, the substance at the root of China’s tainted milk scandal, it is not really that toxic. Scholars consider it to be a “slightly toxic” substance, rather than a “deadly toxic” poison.

Although it is commonly regarded as carcinogenic, the International Agency for Research on Cancer, dedicated to evaluating cancer-causing substances, classified melamine as a third-grade risk - the same level as caffeine, electromagnetic waves and ethyl, the major ingredient in our alcoholic drinks. There is no clear evidence showing that melamine definitely causes cancer.

As it is not fat-soluble, it doesn’t remain long in the body. It is quickly expelled as urine. In fact, melamine wasn’t found in fish species in a fish farm in Korea, even though the fish ate melamine-tainted feed.

The U.S. Food and Drug Administration and the Department of Agriculture officially announced that the health danger was “very low,” when it was discovered that more than 10 million chickens had been fed melamine-tainted feed in May last year. The government did not even implement measures to recall unfit products.

The direct intake of melamine-tainted food or feed can pose a serious threat to the kidneys, contributing to the formation of kidney stones and renal insufficiency.

Melamine has made considerable contributions to prosperity since it was first produced in 1834. High in nitrogen, it was used in fertilizers, ceramic coatings and as a raw material for plastic.

People’s greed turned this innocent substance into a dangerous one. Melamine’s only guilt is that its nitrogen content exceeds more than 66 percent. In 1958, it was granted a patent as a good source of nonprotein nitrogen for raising cows. However, as it lagged far behind rival foods in effectiveness, such as cottonseed and urea, it was largely disregarded as cow feed.

Did China’s vicious entrepreneurs take excessive advantage of it to maximize profits?

As melamine is high in nitrogen, mixing it with wheat gluten made it appear to have a higher protein level.

They added melamine to milk powder to hide the evidence of watering down of the milk product.

It clearly shows that if we look at issues of food security from an economic perspective, it can lead to calamity.

China’s latest food scare seems to us to be the height of outrage. Many American pets died as a result of eating melamine-tainted products. We are deeply concerned about this tendency to take life lightly.