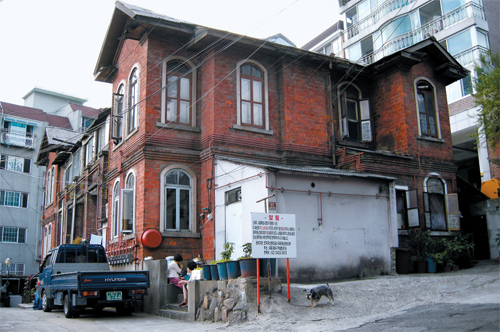 Dilkusha. Due to a prolonged property rights dispute, the registration of Dilkusha, a historic Western-style building, as a cultural heritage monument has been postponed for four years now. Photos by Kim Hyung-eun

On a narrow, humble road in Jongno District, northern Seoul stands a huge, Western-style, red-brick mansion that is, even at first glance, anything but ordinary.

The house is named Dilkusha, and records show it really was a heart’s delight to its original residents. The Taylors, an American family, built and named the house in 1923 and lived there until 1942.

“We first thought it was an office building belonging to Daehan Maeil Shinbo [an early newspaper]. Later, we found out that it was the house of Albert Taylor, an American businessman and journalist,” said Kim Su-jeong from the Seoul city government’s culture affairs bureau.

Taylor told the world about Korea’s March 1st Independence Movement in 1919 as well as the Jeamri Incident, in which the Japanese locked about 30 people in a church in Jeamri, Gyeonggi, fired at them, and burned the church in retaliation for the independence march. 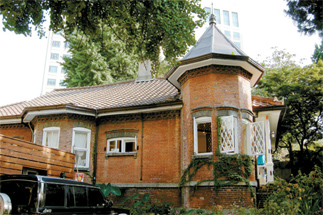 Chungjeonggak. If it is not registered as a cultural property soon, Chungjeonggak, a century-old Western-style house, will be demolished in a major urban redevelopment project in the coming years.

Taylor loved Korea so much that when he died in 1948, he was buried in Yanghwajin Foreign Missionary Cemetery in Seoul, according to his wishes.

Taylor’s wife, Mary, detailed the story of her family and Dilkusha in her book “Chain of Amber,” and her son, Bruce, who visited Korea in 2006, was also reported to be working on a book portraying his years at the house, “Dilkusha by the Ginkgo Tree.”

Mary Taylor, who died in 1982 at the age of 93, left a vivid description of the house in her autobiography:

“It was spring when we moved in. The large hall, downstairs, forty-five feet in length, darkened by the massive porch, was consequently painted with a gold-yellow wash. [...] 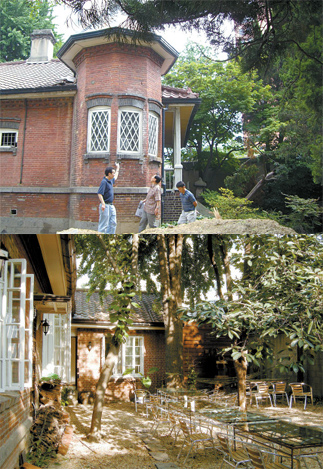 Top: A dilapidated Chungjeonggak before its renovation last September. Provided by Dwight Strawn. above: The backyard retains most of its original facade and trees, according to the gallery and restaurant owner.

“A massive dark oak staircase with carved balustrade and little landings had come from a dismantled, European-style Korean palace.”

As with many modern cultural treasures, Dilkusha’s value and significance wasn’t recognized until recently.

But it took a while to uncover Dilkusha’s history because of a lack of records. 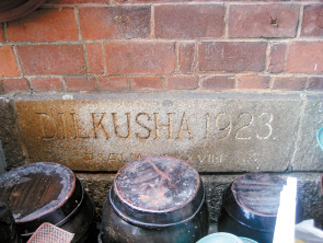 A cornerstone at Dilkusha bears its name, date of construction and a verse from the Bible.

“So it wasn’t until 2006 that the Cultural Heritage Administration announced its plans to consider giving the house registered cultural heritage status.”

Still, unearthing its tale was only the first hurdle in saving Dilkusha and its history.

Quite ironically, there is an ugly, decades-long ownership battle at the very house that is supposed to bring happiness to people’s hearts.

The Korean government argues it is state-owned land, and says the 16 families known to be living in the house are illegal occupants.

“It’s not even an issue of dispute,” said Jang Yu-jin from the government property management division of the Korea Asset Management Corporation. “Documents show it’s been state-owned property since 1962.”

So the Korea Asset Management Corporation, which took over the job of overseeing the property from the Jongno District Office in 2001, has been charging indemnity fees and requesting voluntary evacuation for years. 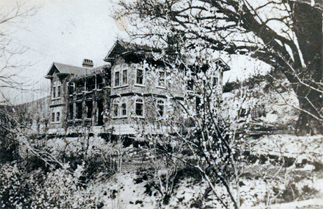 An old picture of Dilkusha taken after construction was completed. Provided by the Seoul city government

But the residents have been living in that house for decades, most of them since the 1960s, and insist on their rights to the house.

“We settled here years ago, raised our children here, saw them move out,” said one of the residents, who has lived in Dilkusha since 1966. She declined to give her name due to the sensitivity of the issue.

“We are the ones who have cared for the building all these years, paying for the maintenance fees and all. The government hasn’t done anything, except putting up this sign saying that it’s theirs.”

The sign, which was recently erected, has left residents fuming.

They insist that even if the matter goes to court, it will be a long battle as there have been precedents recognizing the rights of long-term residents.

Against this backdrop, the Cultural Heritage Administration has indefinitely postponed Dilkusha’s registration as a cultural heritage monument.

“Due to its complex ownership status, we couldn’t give it registered cultural heritage status. Who’s going to take care of it if we do register it?”

Another Western-style building from the early 20th century that survived industrialization and is being considered for cultural heritage status is Chungjeonggak, in Chungjeongno, Seodaemun District.

The pair have a keen interest in Western-style structures in Korea built in the late-19th and early-20th century.

Later that summer, the house underwent a three-month restoration and opened as an art gallery-cum-restaurant.

“The house is estimated to have been built between the 1800s and 1900s,” said Mun Dong-su, who runs the place.

“So when we were renovating it, we tried hard not to alter its original structures and facilities. We kept the window frames, fireplace and the attic. Although it’s old, the house is pretty firm as it’s built with strong Chinese juniper.”

The history of Chungjeonggak is, in fact, rather sketchy as there are very few documents and records.

But based on a house register at Seodaemun District Office, the house is thought to have been built in the 1910s at the latest. It has had at least six different owners.

And according to the accounts of former owners, it was built by a German architect hired by a Japanese citizen.

“The architectural style is that of around 1900,” said Yoon In-suk, an architecture professor at Sungkyun-kwan University.

“The black bricks used in the windows, the shapes and the materials of the arch of the windows were rarely used in buildings built after 1910.”

After visiting Chungjeonggak late last year, Yoon, who is also a member of the cultural heritage committee under the Seoul city government, was so impressed by its historic value that he began to review it for possible cultural heritage status.

In fact, the registration is more crucial than ever, as the area in which Chungjeonggak stands is slated for an urban redevelopment project.

“The plans are at only their initial stages, so it will be another three to four years before anything happens. But if they go ahead, Chungjeonggak will have to go, too,” said Kim Dong-ki of the Seodaemun District Office’s culture and sports division.

While both Professor Yoon and the gallery and restaurant operator Mun support Chungjeonggak’s registration as a cultural property, the owner of the house may not be on the same page.

According to Mun, the owner would prefer the profits from redevelopment.

Which is why Professor Yoon has not yet contacted the owner. In the extreme, the owner could even push to accelerate the redevelopment plans, something which has happened before, Yoon said.

The JoongAng Daily was unable to reach the owner.

Unfortunately, the owner’s consent is needed for private property to be registered as a cultural heritage asset.

“The owner must put a request into the district or city office, which is then submitted to us,” said Kim Seong-do of the Cultural Heritage Administration.

But most owners don’t want their properties to be registered as cultural heritage sites, because they believe they will lose some of their rights, Kim added, pointing out that this isn’t true.

It will be a true loss if Chungjeonggak disappears in redevelopment, according to Professor Yoon.

“Most of the houses built during the Japanese occupation embody a Japanese architectural style. This house is precious because it is built completely in a European style.

“There aren’t many houses like this left today. It provides a glimpse of Western architecture and a lifestyle that came into the old Korea and eventually made who we are today.”