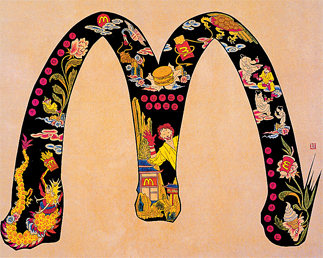 Media artist Lee Lee-Nam has fascinated his audiences with a subject that most contemporary Korean artists know about, but for long have overlooked: he takes an image out of books on classical Korean ink paintings, and turns them into an animated video using digital motion graphics.

In his 90-second video, you see the snow piling up on the bamboo leaves of “Mukjukdo,” a famous painting by legendary Joseon painter Kim Hong-do (1745?1806), who was perhaps better known as Danwon. As the seasons pass, the snow melts away slowly and the leaves quiver in the spring breeze with the gentle sound of the gayageum.

The metaphors inherent in Kim’s original ink painting translate sharply when Lee adds motion and sounds to his work. Only Lee’s digital version better stress the point - the endurance and dignity of a noble scholar expressed through the bamboo leaves - for passive contemporary viewers of art.

“Moving images possess the power to stop people in our age,” he says. “There’s a certain delight to its motion. It’s more complete as an expression, close to life.”

This is true, at least in Lee’s approaches to extract the essence of each painting, and his use of technology to maximize our sensory experiences when viewing the original painting.

Carp from an old painting swim in and out of the artist’s picture frames between panels that make up a wide traditional folding screen; you hear the actual sounds of birds chirping as they fly across the panels. In other works, a painting slides into a photograph, and day turns into night.

In his “Conversation of Monet and Huh Ryun,” which was sold at auction at Christie’s in Hong Kong for 6.6 million won ($5,700) in April, the artist installed framed LCD monitors on the wall - a landscape painting of Huh, a renowned literati painter from the Joseon period, on the left and Monet’s “Sunrise” on the right. And between the paintings from east and west was a boat crossing in and out of the frame on water connecting the two seas.

In a commercial art scene where the sales of media art are often limited to top international artists like Bill Viola or Nam-june Paik, the recent hype over Lee’s work is seen as a puzzling phenomenon.

“I think my work moves people, because I bring out the lyricism in classical Korean paintings while I use a medium that’s so neutral and suffers from the dearth of humanity,” Lee says.

But Lee is not the only Korean artist to reinterpret classical Korean paintings in new ways.

Increasingly, more artists who practice traditional Korean painting, or hangukhwa, are venturing into the genre of western art by playing around with traditional ideas and form. The move is seen as an effort to cross the boundary of artistic genres, and a breakthrough in an increasingly unpopular genre seen by many younger Koreans today as old-fashioned and tedious. 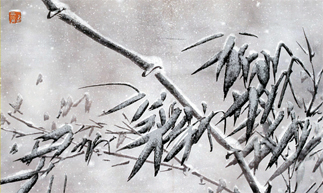 From the plum tree series by Huh Dal-jae

But perhaps the biggest irony in Sohn’s work lies in the collision of his subject matter and materials as the artist undergoes a strenuous process to create a texture on his paper to look like an antique Korean painting.

“When I started out, I simply wanted to paint a non-abstract subject,” says Sohn, a graduate of Korean painting from Seoul National University, a school noted for teaching its students a strict set of rules to maintain the authentic tradition of the genre. “But my work is still largely affected by tradition, conceptually and formally.”

He’s not the only artist these days affected by formal traditions. In her rich palette, Ko Young-mi uses the style of hangukhwa to depict her personal narratives, which are moderated in traditional Korean landscape paintings. 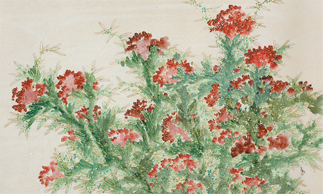 Huh Dal-jae, the eldest grandson of well-known literati painter Heo Baek-ryeon (1896-1977), is considered to have maintained a fine balance between tradition and modernity. Huh, who recently had a one-man show at RHOC gallery in New York, is known for his illustrative brushstrokes that faithfully trace the tradition of literati paintings. The artist, though, ventures into modern experiments by adding bold colors like dark red and blue onto his pale Indian ink and soaking his paper in water brewed with tea to get an antique flavor.

“Certainly, the current generation of Korean artists don’t seem to have the same pressures to stick to tradition,” says Jin Joo-hee, the curator of Gallery Flower in Hongdae, which specializes in hangukhwa. “They are lighter and have more wit.”

Gallery Flower opened in 2004 as the first alternative space in Korea with an emphasis on hangukhwa.

“In a way, many artists who are still with the genre go through the classic struggle between tradition and change,” Jin says. “The market wants stars and news ideas, but they are trying to stay faithful to the medium.”