Dishonor and a dashing lead, but still a flop

Dishonor and a dashing lead, but still a flop 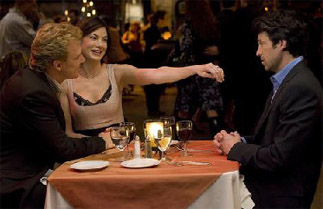 There is a phenomenal Volkswagen commercial in which a young man speeds through a rural landscape to make it to a church in order to stop the wedding of the woman he loves. In just 30 seconds, the commercial manages to artfully build tension and emotion, all before leaving viewers at a cliffhanger in the aisle.

A good friend of mine introduced me to this commercial over YouTube one night, before wistfully sighing, “I wish I had two men battling it out for me.”

My reply: “But I don’t want my wedding banged down like that!”

Well, banging down Hannah’s wedding is exactly what happens in “Made of Honor,” a romantic comedy starring the McDreamy Patrick Dempsey. He plays Tom, a Casanova who attaches more rules to bedding women than Owen Wilson and Vince Vaughn in “Wedding Crashers.”

The only constant female presence in Tom’s life is Hannah (Michelle Monaghan), his platonic best friend whom he meets in college in the opening scene. I should have known from here on that Made of Honor was headed down the wrong track: As someone who swoons over Patrick Dempsey’s face every week during “Grey’s Anatomy,” I know his wrinkles well. And there is no way that you can make a 42-year-old look like an undergrad just by combing his hair differently.

When Hannah jets off to Scotland on business (what a coincidence - I’m going to Scotland next month!) Tom realizes with probably the worst dialogue ever that he’s in love with Hannah: “Guys, I think I’m having feelings for Hannah,” he says to his basketball buddies. “You know, maybe there’s more to life than just sleeping around.”

The problem is when Hannah gets back, she’s become engaged in a whirlwind to a hunky Scottish duke, Colin (Kevin McKidd). Luckily, Hannah asks Tom to become her “maid” of honor (hence the film’s title), which provides Tom the perfect opportunity to try to take down this wedding from the inside, a la Julia Roberts in “My Best Friend’s Wedding.”

Unfortunately, Dempsey, who plays Dr. Perfect on Grey’s, does nothing honorable in this film. His Tom is the type of guy who enjoys taking a pack mentality against the pathetic guy at the gym, who relishes the chance to beat his best friend’s fiance on the court. In this week’s Washington Post Magazine, reporter Liza Mundy tells a story about how when Michelle and Barack Obama were dating, Michelle had her brother take Barack out on the court to test his character. He passed, reportedly “self-confident but not a ball hog or a hotshot.”

Well, Tom would have failed this test. He’s a jerk all throughout this movie, completely selfish in his motivations and oblivious to Hannah’s happiness at finding love. The film is all too convenient in its plotting, and frankly mean-spirited in its take on overweight women, Scottish culture and sex. There are also frustrating logical holes in the film, like the absence of e-mail, landline phones or Skype on the British isles.

I did laugh seeing Tom in a too-short kilt (nice tighty-whities shot) and enjoyed the gorgeous Scottish landscape, but Made of Honor is simply Patrick Dempsey at his worst. I’ll just stick to my Volkswagen commercials and Grey’s.