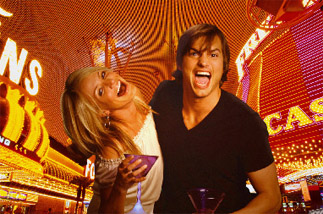 The best thing about “What Happens in Vegas” is the artful and lively acting by Cameron Diaz (Joy McNally) and Ashton Kutcher (Jack Fuller) against the background of Las Vegas, a city of debauchery.

We can easily forget the tediousness of the story’s development as we watch Joy and Jack comically quarrel with each other, backed up by their respective friends.

Dumped by her fiance, Joy goes off to Las Vegas with her best friend, Tipper (Lake Bell). Fired by his own father, Jack does the same with his best friend, Hater (Rob Corddry).

Due to a computer error, they are assigned the same room and the comedy takes off from there. After a big night out on the town, Joy and Jack wake up to discover that they are total strangers who have gotten married.

It turns out Jack has also won a $3 million jackpot with Joy’s quarter. While they are filing for an annulment, the judge sentences them to six months of “hard marriage” and freezes the jackpot money.

Diaz, as the heroine-with-faults whom we can’t help but love, and Kutcher, a master charmer, are a perfect combination. As each hopes to keep all the money, they try to blame each other for their marital strife.

Their antics are mostly literal toilet humor, such as Joy teaching Jack how to use the toilet seat cover and Jack removing the toilet door, but they’ll definitely make you laugh out loud.

By the time the comedy becomes a drama, the unlikely pair of an organized career woman and a loafer are fascinated with each other.

Joy sees Jack in a new light as she realizes how much he cares for his family, and Jack is charmed by a dressed-up Joy at her boss’s party. Since the drama develops fast enough to keep us from getting bored, it’s O.K.

But what’s unbearable about this film is Joy’s co-worker, Chong (Michelle Krusiec), portrayed as a stereotypical Asian geek throughout the film.

She isn’t the boss’ favorite but is desperate for a promotion. Surprise, surprise, Joy is in pole position for the new job. Although Chong is continually ignored by the boss, she makes foolish efforts to kowtow.

Did the director want to show that the dumber Chong becomes, the nicer Joy looks? If so, it was a pathetic attempt.

The DVD’s special features include a commentary with director Tom Vaughan and editor Matt Friedman, “Sitting Down With Cameron and Ashton,” “DVD Extra Time With Zach Galifianakis” and a gag reel. Rather than watch Diaz and Kutcher gossip, it’s much more fun watching the interview with Galifianakis.


What Happens in Vegas