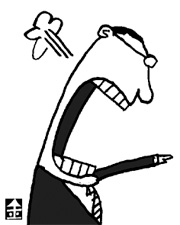 There is a type of comedy that tries to make people laugh by fiercely scolding and getting angry at someone for no good reason. It is known here as “yelling comedy” and is extremely common among comedians on Korean television.

It is not just the yelling at someone, but the scolding that amuses Korean audiences. By this action one gains superiority over another person by finding fault with him.

Before yadan assumed the meaning of to scold in Korean, it used to refer to the action of picking away at the whys and hows that are hidden from view. However, the word has now settled in its current meaning.

Related to the word’s origin, some refer to the historical fact that people who gathered to listen to Buddha’s preaching ended up creating a commotion. But this theory is not quite right; the origin of yadan just means “to cause a commotion” and is not related to scolding others.

Nowadays, many are questioning the validity of National Assembly inspections, the annual audit of executive bodies’ management of the government which is the heart of the National Assembly’s work. However, the inspection has turned into a forum to show off for some legislators, regardless of the original intention of the inspection.

In what seems more like a theatrical performance, many legislators are seen calling in pitiful-looking officials and then scolding and berating them in front of an audience. One lawmaker’s behavior in calling in housewives who came out with their babies in strollers during candlelight protest rallies last summer demonstrates this.

The relentless barrage left the housewives unable to speak, the questions not even properly distinguishing between the candlelight rallies and debate over bringing babies to the protests.

Legislators who raise their voices regardless of the fundamental questions of right and wrong in order to gain media attention, or those who speak vulgarly to government officials are all the same.

Is it really an inspection of government bodies or just an opportunity to yell and scold?

Sadly, their performance doesn’t make us laugh, unlike the yelling comedians on television.