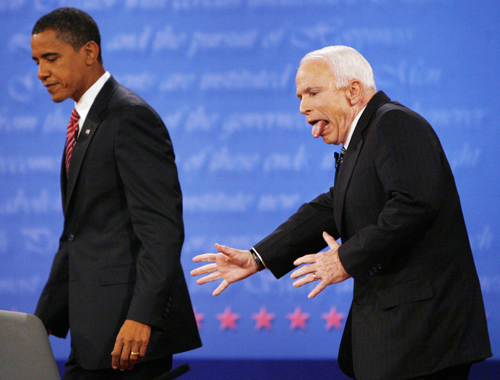 As I watched the third and final U.S. presidential debate, I witnessed a bizarre moment. At the end of the debate, the Republican presidential candidate John McCain stuck out his tongue while making a strange gesture as he tried to thank Bob Schieffer, the moderator of the debate.

Senator McCain initially followed Senator Barack Obama, the Democratic presidential candidate, as they left the table where they had been seated, before realizing that he had to go around the table to shake hands with Schieffer. This prompted the funny scene. Of course, photographers did not miss the moment.

McCain’s comic face captured on camera hardly befits a war hero or a future president. The photograph only captured McCain’s unguarded behavior and does not show his true self.

However, it is symbolic in a way. The strange scene is an illustration of McCain’s problems. The election campaign is leaning toward Obama. Just like the U.S. economy, McCain is facing a serious crisis. Many cite the economic crash as the reason for the recent fall of McCain who once was ahead of Obama in the polls.

However, there is a more decisive element. The point is that McCain is losing in the competition of who acts more presidential. According to a recent ABC opinion poll, Obama beat McCain by 14 percentage points on who is more likely to become a strong leader.

The pro-Republican network Fox News asked Americans who they would turn to when they were faced with a difficult decision, and 7 percent more respondents chose Obama over McCain.

The political veteran who served two terms in the House of Representatives and four terms as a senator is in too much of a hurry to chase Obama just as he was photographed doing at the debate.

McCain might be feeling frustrated, thinking he wouldn’t have been cornered were it not for the financial crisis that is said to be the worst since the Great Depression of the 1930s. True, his campaign was hurt by the financial crisis. However, he should feel sorry that he lacks the competence and leadership to turn the crisis into an opportunity.

The Republican administration is being blamed for having created the crisis, but with his “maverick” image, McCain could have turned the tables to his advantage. If he had responded to the expectations of the citizens who wish to turn to a leader with experience at a time of crisis, this presidential election would have been very different.

However, he failed to inspire trust. He temporarily suspended his election campaign to help resolve the financial crisis, but failed to produce any specific solution. At the White House meeting, he acted like a bystander and didn’t utter a single word. So the lasting impression he left was of impulsively suspending the campaign without understanding much about the economy.

With his ratings falling, McCain is now focusing on the offensive against Obama. He tried to brand Obama as a friend of a terrorist, based on the fact that Obama had once served on the board of a scholarship foundation in Chicago with a professor who had been a radical anti-war activist in the 1960s.

These days, McCain is busy depicting Obama as a socialist.

However, the more he focuses on personality attacks, the less McCain looks like a leader. The competence of the man at the helm is revealed when facing a storm, and the caliber of a politician is proven at times of national crisis.

McCain boasted at the debate that he was a war hero, but the public did not fail to catch the reality that being a war hero does not guarantee that he is capable of state administration and crisis management.

What McCain needs now is to display the behavior, appearance and leadership qualities appropriate for a president, not a soldier’s bravado with a chest full of fraying war decorations.

*The writer is the Washington correspondent of the JoongAng Ilbo