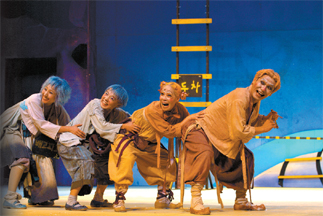 A scene from “The Train,” a silent play staged by the Cho-in Theater Company. Provided by Cho-in

Last month, residents of a small town in Younggwang County, South Jeolla, were treated to a rare cultural experience when the Cho-in Theater Company staged a mime called “The Train” at Younggwang Girl’s Middle School.

For most of the people in the auditorium, this was the first time they had ever seen a play performed on a stage.

“A lot of the audience were surprised by the intensity of the show and went through emotions they had never felt before,” said Park Chung-euy, the play’s director and the founder of the theater group.

The Train was part of a project run by Arts Council Korea to take artistic performances to villagers living in more remote areas of the country, people who rarely get the chance to watch anything artistic.

Since 2004, the council has been dispatching cultural arts groups to secluded communities where they put on other kinds of arts shows. This year, 129 groups were selected, one of which was Cho-in.

As part of the project, the Cho-in actors staged their silent drama in 10 villages in North and South Jeolla. The play was well received and the arts council will help run the show again next month. The troupe chose Yeosu and Suncheon in South Jeolla as its next destinations and performances are slated for Nov. 7 and 8.

Though the cast and synopsis of The Train is no different from the original production staged in Seoul, the touring play’s props and scenery are less fancy. The equipment needs to be transported from Daehangno, the troupe’s main performing area in central Seoul, to villages several hours away from the capital, so the amount of stuff they can take is limited.

“The touring version might not look as good as the Seoul show but that doesn’t spoil the villagers’ night out,” Park said.

Although not a word is spoken in the play, many people in the audience are deeply affected by the story and leave with tears in their eyes, according to Park.

The Train tells the story of an old couple (Hyun Dae-cheol and Song Kyung-soon) who are both magicians.

It is wartime and the couple decides to leave for a safer place. But they lose their train tickets and end up begging for new tickets at the train station and performing magic tricks to grab the attention of passers-by, who are mainly soldiers.

“Words allow us to communicate but from time to time they can lead to misunderstandings,” Park said. He wanted viewers to use their imagination instead to interpret the story.

The play - first staged in 2002 - has been invited to many international festivals like the Frankfurt Sommerwerft Theater Festival in 2006 and the Singapore Arts Festival in 2007.

“Many areas outside of Seoul are isolated from cultural performances,” Park said. “If you open up a map of Korea and point to an area, it is unlikely that it offers much in the way of cultural activities.”

For this reason, Park hopes his troupe continues touring around the nation presenting its shows.

But money is always a problem.

The Arts Council offers the troupe 2.4 million won ($1,646) for each play staged, which isn’t enough to cover labor and transport expenses, according to Park.

Making things worse, the number of people going to see dramas in Daehangno has fallen by half over the past few years.

The play will be on in Seoul next year. Other representing works produced by Cho-in are “The Angel and the Woodcutter” and “Hotel Splendid.”