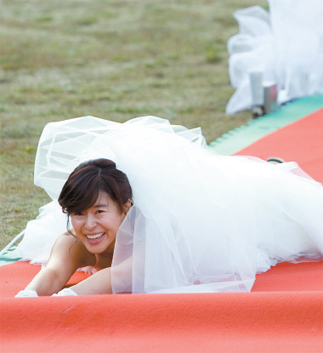 Love conquers everything, they say.

At least, love conquered the Korean TV scene on Sunday evening. Turn on the television during prime time Sunday evening, and you’ll see reality shows that feature celebrities either dating or married.

Channel surfing last Sunday on the hunt for prey for this review, I didn’t have too many choices. The three major TV networks have surrendered to love-related reality shows.

Yes, I’ve already tackled several matchmaking shows in recent months, but, watching celebrities in wedding gowns hustling for a chance for a blind date, I made up my mind to surrender again to this darling material of the Korean TV scene.

In an approach to compete with MBC’s successful “We Are Married,” a reality show that features the fake married lives of celebrities, KBS and MBC have produced their own matchmaking shows. “Single Single” on KBS features TV celebrities on a four-day trip, choosing dates and eyeing up who’s on offer.

Meanwhile, “Here Comes the Gold Miss” on SBS has a bolder concept. It poses as a matchmaker for six female celebrities.

The director said last week that the show would go on until all six women walk down the aisle. “Gold Miss” is a Korean-made English term that refers to women over the eligible age to tie the knot yet rich enough to command a high social standing.

The women on the show are aged 29 to 38, and every week they fight for a chance to go on a blind date. The first episode had the women play what it called a “wedding triathlon.”

Donned in pure-white frilly wedding gowns, they ran, rolled and tumbled on the ground. The games included bouquet-throwing and an obstacle race. The women had to carry dolls in the shape of grooms and smash obstacles that were printed with words like “bygone romances.” A subtitle ran with this scene saying “Risking your life to win.” For them, marriage seems to be a life-and-death issue. Talk about desperate single women, who never hesitate to run on a rocky road to say the two little words of “I do.”

The show also kindly reminds viewers of the ages of the celebrities in the subtitles from time to time.

The first winner in this survival of the fittest was a 38-year-old actress, who got a blind date with a 36-year-old lawyer as her prize. As she turned him down, saying, “He is not my ideal type,” she got a lashing from her peers who thought she needed a reality check.

The show’s cruelty appeared to be at its peak when it scored the levels of the women by their age, looks and financial status. After teaching them how desperate they should be, the show put the women back in the game to win a blind date.

The show tries to make viewers laugh by showing how desperate and silly these women are. But a woman viewer like me is left to wear a bitter smile at the cold reality hidden in the show. After all, there are only two more months to go before getting a new calendar, and I guess more women are on their cell phones to badger friends to set them up after getting a reality check from these shows.