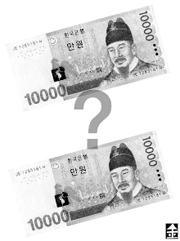 The most notorious counterfeit bank note in modern society is the “supernote.” The fake dollars earn their “super” tag because the technology used to produce the bills is superior to that of the original. They have broken through counterfeit deterrence technology so thoroughly that even experts have difficulty distinguishing counterfeit notes from real.

It is estimated that one in 10,000 one dollar bills currently in circulation is a supernote. Who produced them is still a mystery. The U.S. government’s claim that North Korea is the culprit is convincing, but Iran, Syria, and even the U.S. CIA are being suspected.

The supernote may be the only counterfeit bank note that is practically impossible to detect, but with a multitude of high-tech color copiers, scanners and computers, it has now become possible to produce counterfeit bank notes that outwardly look similar to the real ones. It is no longer necessarily the work of organized criminals or those with a great level of expertise.

Governments in all countries are mobilizing technology to prevent such counterfeits. A prime example is the EURion anti-copying mark. The Orion stars imprinted on the front and back of our 10,000 won bills are an example. The latest copiers are also programmed not to be able to copy bank notes with such marks. Most countries have adopted this mark.

The second technology used against computer software programs that handle images, such as Photoshop, is the counterfeit deterrence system that blocks computers from scanning and amending digital identification transparently printed on bank notes.

This technology has been supplied to member countries of the Central Bank Counterfeit Deterrence Group in which 30 central banks of major Western countries are participants. Unfortunately Korea is not a member. The Bank of Korea’s counterfeit deterrence measures against computers are weak.

The issuing of 100,000 won bank notes planned for early next year is likely to be delayed for some time owing to criticism over the design, including the inscription of Dokdo. We think they should use this delay to introduce CDS technology in producing the 50,000 won and 100,000 won bills.

The need is even greater considering the recent discovery that 10,000 won counterfeit bills were produced using only a computer and scanner.

If we produce new 100,000 won bills without CDS measures, it is worrisome what amateur counterfeiters will be able to produce.