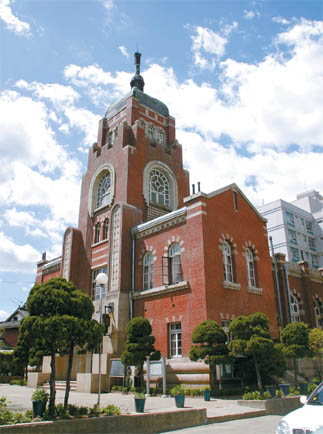 The Central Temple of Cheondogyo in Jongno

Among the modern office blocks and traditional buildings in Jongno, downtown Seoul, stands an unusual structure - a two-story, red-brick Western-style turreted edifice. Is it a town hall? A school? A cathedral, maybe?

The sign at the entrance says “Central Temple of Cheondogyo.” Cheondogyo, which means “Religion of the Heavenly Way,” is an indigenous Korean religion.

The temple has been designated Tangible Cultural Property No. 36 by the Seoul city government.

With just 100,000 followers today, Cheondogyo is obscure compared to Christianity, Buddhism or Roman Catholicism, especially among the younger generation.

But while its doctrines and practices may not be well known, it played a vital role in Korea’s modern history.

Founded in the 1860s during the Joseon Dynasty (1392-1910) by a scholar named Choe Je-u (1824-1964), the religion preaches that God is in every person. Thus, everyone should strive to become intelligent, moral members of society with high social consciousness.

Before changing its name to Cheondogyo in 1905, the religion went by the name Donghak, which meant “Eastern learning.” This was as opposed to Western religions such as Christianity and Roman Catholicism, which had just begun to flow into Korea.

Cheondogyo ushered in the Donghak Movement in 1894, a nationwide farmers’ revolt protesting exploitation and tyranny of local government officials. Unable to control the rebellion, the government sought help from Chinese and Japanese troops. This led to the first Sino-Japanese War (1894-1895), with foreign armies fighting for control of Korea.

But it was during the Japanese colonization (1910-1945) that Cheondogyo’s influence on Korea and its people - in both the religious and social aspects - was more evident than ever. And the central temple was at the center of Cheondogyo’s activities and contribution to the fight for national independence. 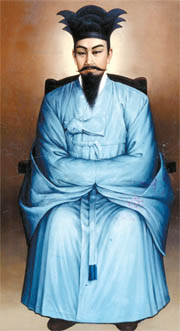 Many Cheondogyo followers were at the forefront of various independence movements during Japanese colonization. The religion’s third supreme leader, Son Byeong-heui, was one of the 33 representatives who drew up the Declaration of Independence and led a massive rally on March 1, 1919 - the catalyst for the establishment of the provisional government in Shanghai in April that year.

“They needed money to organize the March 1st Movement. So Son and others set up a ‘Central Temple Construction Fund,’ which was, in fact, a cover to raise money for the rally without being stopped by the Japanese,” said Kim Dong-hwan, the current supreme leader of the sect.

“Back then, there were as many as 6.1 million Cheondogyo followers, so the fund must have been pretty big. But only a small portion of it was used for the actual construction of the building.”

It was also at this very site that Cheondogyo believers distributed the Declaration of Independence to the Korean people, as indicated by a stone marker at the gate to the temple.

Cheondogyo leaders wanted the central temple to be as large as possible, mainly to justify the large sums of funds collected, but also in part to dwarf the headquarters of the Japanese General Government in Korea, according to Kim. But due to repeated interference from Japan, the design had to be adjusted several times to its current size. 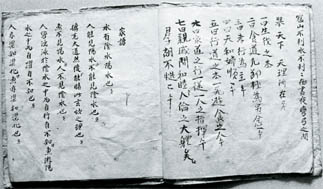 The Cheondogyo scriptures, currently available only in Korean and Chinese. [JoongAng Ilbo]

The ground-breaking ceremony took place on Dec. 1, 1918, but construction was postponed due to the March 1st Movement.

According to data compiled by the cultural property division of the Seoul city government, Cheondogyo followers entrusted the design of the temple to Nakamura Yoshihei, a Japanese architect who came to Korea in 1908 and designed a number of colonial buildings in Korea, including Sookmyung Girls’ High School.

Some may find this odd considering the sect’s involvement in the fight for independence, but Kim says it was part of efforts to appease the Japanese authorities.

Architectural experts say the T-shaped, Secessionist style structure, which uses mostly red bricks and granite, is unique; it is dotted with Eastern elements such as bas-relief representations of the Rose of Sharon, Korea’s national flower.

Along with the Myeongdong Catholic Cathedral and the headquarters of the Japanese General Government in Korea, the Central Temple of Cheondogyo is one of Seoul’s representative buildings of the 1920s.

Cheondogyo also spearheaded the Children’s Movement (also known as the Youth Movement), which aimed to promote the rights of children and pass on the spirit of the March 1st Movement to the new generation. Led by Bang Jeong-hwan, one of Son Byeong-heui’s sons-in-law, Cheondogyo believers banded with other religious groups and set up the Korean Children’s Movement Federation. An office was set up within the temple.

In the final years of the Japanese invasion, the temple was used as a munitions factory by the Japanese army, according to Kim.

Over the years, the temple has undergone at least six major restorations, and is frequently repaired and refurbished. When I visited, part of the structure was being repainted.

Today, Cheondogyo followers meet here at 11 a.m. every Sunday. The temple is certainly inactive compared to its heyday and is locked most of the time.

But it is the birthplace of a once-thriving homegrown religion, and a witness to Korea’s turbulent modern history.