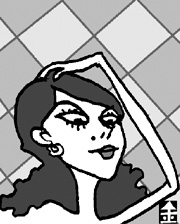 One of the most tragic works of art in the early 20th century features a woman named Alma Mahler. Her first husband was the late-romantic composer Gustav Mahler. His Symphony No. 6 in A minor is tender and solemn, although often referred to as the “Tragische (Tragic)”.

This soaring melody was composed for his beautiful wife, 19 years younger than him. His heart was fervently set on his voluptuous and intelligent wife. His passion verged on madness, to the extent that he kept her at home to maintain exclusive possession of her. His symphony presaged their tragic ending.

Oskar Kokoschka is a leading exponent of Expressionism and a key figure in European art. Kokoschka’s oil painting “Bride of the Wind” is a self-portrait expressing his unrequited love for Alma Mahler, widowed after the death of Gustav Mahler. Kokoschka began a passionate affair with the older Alma Mahler one stormy night. Kokoschka was so obsessed with her that he sent her hundreds of love letters, but was ultimately rejected by Alma, who was searching for a more stable life. For more than 66 years, he was plagued by schizophrenia while Alma continued to be spoken ill of behind her back.

Recent films and TV dramas are flooded with seductive femme fatales, sexually attractive and likely to cause problems for any man who is attracted to their irresistible charms and beauty.

From Shin Jeong-ah, once known as the “art world’s Cinderella,” to a story about a mistress in Yeouido, people continue to talk about femme fatales.

Anna Nicole Smith, who worked at various strip clubs before gaining fame in an adult magazine, married oil tycoon Howard Marshall, 63 years her senior. One year after their marriage, Marshall died. Smith inherited her husband’s estate of $470 million but was she as happy as many assumed?

Such women can be understood differently from a woman’s perspective. Alma had an inborn artistic talent. She discovered and loved the hidden talents of Mahler and Kokoschka. Her second husband, Walter Gropius, was a great architect, and her last husband Franz Werfel, a world-renowned writer. Alma recalled that they were highly gifted and beautiful people.

Following her husband’s death, Smith had to fight a lengthy legal battle over his estate and after her 20-year-old son died, she ended her lonely life in a hotel room last year overdosing on prescription drugs. Until truth reveals itself, we should not carelessly criticize femme fatales. It is the modern version of “The Scarlet Letter.”