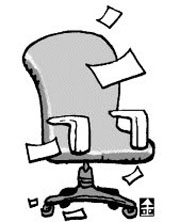 The key differences between the terms “depression” and “recession” are vague. During his 1980 Labor Day speech at New Jersey’s Liberty State Park, Republican presidential nominee Ronald Reagan offered a clear definition between these two concepts: “A recession is when your neighbor loses his job. A depression is when you lose yours.”

He also went on to list the economic failures of his opponent, then-President Jimmy Carter, before adding another definition: “Recovery is when Jimmy Carter loses his job.”

At the outset, Reagan’s campaign advisers tried to dissuade him from using humor, particularly jokes about the serious and sensitive issue of unemployment. However, Reagan stuck to his guns and won the election in a landslide victory thanks in part to his sense of humor.

“The Texas Chain Saw Massacre” is a 1974 American horror film, full of grotesque murders and acts of cannibalism. The three brothers in the film were originally naive villagers who worked in a slaughterhouse. They were unable to overcome their anger and sense of frustration as their skill became rapidly obsolete in a dynamically changing technological world.

Their resentment led them to become cold-hearted enough to massacre other people. Although it was just a B-rated slasher flick, it succeeded in gaining a favorable reception from critics due to its social awareness. Unemployment was rampant in the United States right after the first oil shock of the 1970s. Unemployment was regarded not as a temporary pitfall but as a nightmarish trap from which one cannot extricate oneself.

Unemployment is one of the most pressing issues facing the whole world. The real unemployment rate in the U.S. for next year is estimated to hover somewhere between the 10.8 percent during the recession in the 1980s and 7.8 percent in the early 1990s recession.

Korea’s non-regular workers are falling victim to economic reality. News about layoffs of thousands of workers is pouring in.

The solution that humanity has discovered to prevent a sharp rise in unemployment in harsh economic times is either to drastically increase public investments, or to help management and regular and non-regular workers try to make concessions to stave off worsening recession or worse, depression.

Inevitably we have to take a more compromising attitude than ever before. In this regard, will we be able to take an easy and composed stance like Reagan did to the extent of using unemployment as a source of humor?