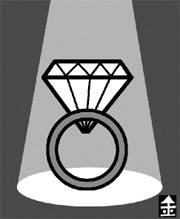 Humans began to use diamonds first as an abrasive. Traces of ruby and sapphire were discovered in a Chinese stone ax from the Neolithic era 4,500 years ago, its surface polished smoothly like a mirror. A research team from Harvard University concluded in 2005, “This could not have been done without using diamonds as an abrasive.”

Diamonds were also once used as a charm for sorcery. Around 7 B.C., the king and soldiers of the Dravida Kingdom in India believed that “the hardest stone in the world” had a magical power to protect the person wearing it. This is exactly in line with the origin of the word diamond, which comes from the Greek adamas, meaning “untameable, invincible.”

During the Middle Ages and the Renaissance in the West, kings and the nobility possessed diamonds to ward off disease and avoid calamity.

Diamonds began to be regarded as jewels around the 15th century, after a grinding method was discovered. A poor young man who practised metalcraft in Venice was in love with his master’s daughter, and asked to marry her. The father set an impossible condition: “If you find a way to grind diamonds, I will give you my daughter’s hand.” After much deliberation, the young man found the answer. Rubbing diamonds against each other produces a microscopic powder that can be used as an abrasive.

Nowadays, diamond jewelry is mainly used for wedding gifts. Thanks to the advertising slogan “A diamond is forever,” it has become a symbol of eternal love. The advertisement used by De Beers has so dominated the world diamond market, it is considered one of the most successful in history.

In Korea, diamonds have become famous mainly as stolen objects. The water-drop diamond found in the possession of the notorious thief, Jo Se-hyung, arrested in 1982, is a prime example. The 4.6 karat diamond was confiscated, but no one came forward to claim it. Victims of the thief included a former economy vice-minister, a lawmaker, and a firm’s president. The burglary at lawmaker Kang Sung-chun’s home was the talk of town in those days. The problem was a one-karat diamond Kang claimed was his sister-in-law’s. However, the police disclosed, “It was reported as having been taken in the robbery in the victim record that legislator Kang signed, but [he] was not really robbed.”

The position of the legislator, whose political career started in labor activism, became untenable. In this case, the diamond is neither a charm to ward off bad luck nor a symbol of eternal love. It is simply a stone that brings misfortune.