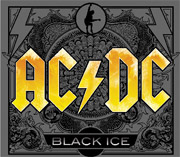 There’s a requisite reference to rock ‘n’ roll and women, and Angus Young still has some serious guitar chops on “Black Ice,” the Australian hard rock quintet’s 16th studio album and its first in over eight years.

It opens with the first single, “Rock ‘n’ Roll Train,” which vaguely reminds the listener of one of the band’s classics, “Highway to Hell.”

“War Machine” has a sleek intro building into Young’s driving riffs. “Spoilin’ for a Fight” is another typical early 1980s AC/DC-brand hard rock. “Smash N Grab” and “Decibel” have a decidedly bluesy feel.

And if the opening riffs on “Stormy May Day” didn’t remind you of Led Zeppelin’s “In My Time of Dying,” you probably don’t deserve this album.