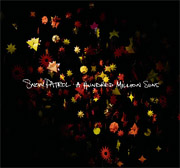 Snow Patrol’s big break came with its fourth album “Eyes Open” and the track “Chasing Cars.” The album sold over 4.5 million copies worldwide and became the U.K.’s biggest selling album of the year. Chasing Cars won the accolade “Best Song of All Time” from the listeners of Virgin Radio, a British radio station.

The Irish band has released another ambitious album, a departure from its previous music. Titled “A Hundred Million Suns,” it was recorded in rural Ireland and in Berlin.

The record offers a bit of everything. “Take Back the City,” the group’s first single, comes off familiar with an obvious rock sound.

With “Set Down the Glass,” the heartbreakingly beautiful lyrics and melody are hard to resist.

The 16-minute “The Lightning Strike” may be, to a rock novice, too much to absorb, but it certainly does enlarge the worlds of many, perhaps to the extent they see a hundred million suns of their own.