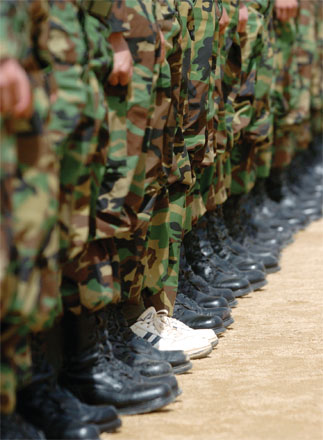 The Constitutional Court has been asked by a military court to judge the constitutionality of a military penal code that supposedly forbids sexual activity between gays in the military. [JoongAng Ilbo]

When a military court asks the Constitutional Court to make a judgment call on a long-standing military rule on homosexuality, you know Korea is changing.

Last week, the military court of the 22nd division postponed a ruling on the case of a noncommissioned officer charged with “disgraceful” conduct.

The officer in question is said to have engaged in sexual activities with a soldier under his command.

The military court is questioning the constitutionality of Article 92 of the Military Penal Code because, the court says, current military rules on homosexuality are too vague.

In particular, the court expressed doubt on the clarity of the article, which only vaguely states that sexual activity between men and “indecent behavior” is forbidden.

There is no mention of whether the article refers to “indecent behavior” among females, between members of the opposite sex or whether consensual sexual activity between males is also subject to punishment.

The military court also noted how other societies, and to some degree Korean society, have adopted a more flexible attitude on sexuality.

“There is an international trend on this issue in countries such as the United States, and in Europe. Even here, in movies, TV dramas and books, homosexuality is gaining more social interest.

“As homosexuality is acknowledged more widely it is true that people’s attitudes on the subject are also changing.

“The current military rule states that those engaging in homosexual activity are subject to a jail sentence that cannot exceed a year,” the military court said in its ruling.

To jail someone for homosexual activity that was not forced is too harsh, the military court said.

“It’s against the principle of equality and infringes on the individual’s freedom of choosing [his] sexuality,” it said. The Constitutional Court had ruled on the particular wording of article 92, but this is the first time a military court has questioned its existence.

The military penal code introduced in 1962 has been amended 13 times, but article 92 has withstood any outside infringement. The Army forbids soldiers to engage in a romantic relationship if the rank difference is more than two levels or if the relationship is between an instructor and a student. In reality, though, most violations are punished lightly.

There are other signs that homosexuality in the military is coming out into public eye.

The Defense Ministry, by far the most conservative institution in the country, asked the actor Hong Seok-chun last year to give a talk to military officers at Army Headquarters in South Chungcheong on how officers should handle homosexual soldiers under their command.

It was the first time the military had secured outside help on an issue it knows it can no longer avoid. Hong announced his homosexuality seven years ago, which came as a shock to deeply conservative Korea.

Nevertheless, the same ministry that asked Hong for advice has also played with the idea of devising measures that would punish noncommissioned officers and above by asking them to leave the military if they were found to be gay.

The ministry’s official position is that there are no gay officers, though the logic behind such a statement is far from scientific. When asked for proof, a Defense Ministry official said nobody has stepped forward yet to acknowledge his orientation.

A different rule is used for rank-and-file soldiers. They have to serve their mandatory military service unless they are judged to be suffering from mental illness caused by their sexual orientation or by levels of hazing that make serving in a unit impossible. 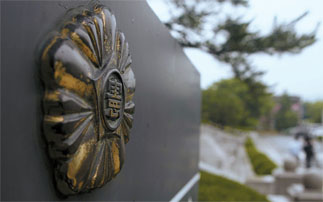 The issue is now the subject of a fierce debate. Cheon Won-chaek, who served as a military lawyer, argues that the military needs special rules for these situations.

“Those who argue for the abolishment of article 92 have little understanding of the military,” said Cheon. “If you legalize homosexual activity in the military, order will fall apart. If soldiers in the same barracks express affection for each other, they will break the cohesion of a unit and you won’t be able maintain discipline.”

Parents about to send their sons to the service say they are concerned. Wanting to be identified only by his last name Jun, one parent said special measures are needed.

“Unless you give [soldiers] separate rooms, I would be worried if article 92 was abandoned and soldiers were living together in close quarters,” said Jun.

In the Korean military, soldiers often sleep together on elevated floors or in bunk beds. They don’t have separate rooms, except for officers who are usually quartered in their own apartments. Some units that are very small provide separate quarters for their soldiers but such cases are the exception, not the norm.

The decision by the 22nd division’s military court to question article 92 may also reflect the changing perception of homosexuality here.

It’s important to note that the younger generation has greater access to different cultures than their parents ever did. What’s even more interesting is all three military judges from the 22nd division are in their 30s.

Whatever the final verdict, civic groups hope that discussions on homosexuality will gain momentum. Chun Chun-hun, a lawyer for the civic group Sympathy, said jail sentences are not the solution.

“When you look at sexual assault cases in the military, homosexuals more often than not are the recipient of violence rather than the assailant,” said the lawyer.

Choi Hyeon-suk, an official at the civic group Sexual Planning, argued that without clear guidelines on heterosexual activities, singling out homosexuals was discrimination. “The military is an extension of our society. It cannot limit the rights of its citizens,” the official said.

Even in the United States where homosexuality is more accepted than here the issue of gays in the military is still sensitive. Former President Bill Clinton offered the “Don’t ask, don’t tell” rule and in a survey in July by the Washington Post and ABC Network, 75 percent of the people polled said homosexuals should be allowed to serve in the armed forces.

Nevertheless, U.S. Chairman of the Joint Chiefs of Staff General Peter Pace created a fire storm when he told the Chicago Tribune in March, “I believe homosexual acts are immoral, and that we should not condone immoral acts.”

The general supported Clinton’s policy as it enabled people to serve in the military, but he opposed gays serving openly.

Attempts have been made in the past to tackle the issue in a more constructive way, but to no avail. In 2006, former Defense Minister Yoon Kwang-ung tried to abolish article 92 but back paddled following criticism from conservative civic groups.

As for the present questions that the military court of the 22nd division has raised, past records suggest that the court might uphold the controversial article.

In May, in a case that partially involved article 92, the court made clear that the interpretation of article 92 would be in line with the aim of maintaining military discipline and that it viewed as unacceptable any sexual activity that went against a healthy moral concept.

Experts argue that resistance within the military is largely due to misconceptions about homosexuality and say more education is needed.

“These are not sick people who have a disease. They are just different,” said Seo Mi-ran, an official with the National Human Rights Commission of Korea. “They can serve their country just like anyone else. You don’t punish someone for being different.”