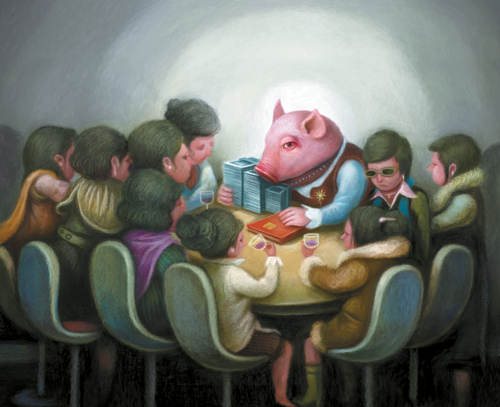 Two months ago, Ugak, an upscale restaurant in southern Seoul, was packed with some 50 stylish housewives and a few self-employed businessmen. They were dressed in fancy clothes and drove black imported cars that glittered in the parking spaces outside.

The group had assembled at the Korean restaurant for an emergency meeting. Their nail biting reflected hearts filled with anxiety. But once you know their story, their worries become fairly understandable.

Those present at the meeting have lost considerable amounts of hard cash that they had been paying in monthly installments as members of Dabokhoe, a wealthy private savings circle. Dabokhoe is Korean for, literally, “a group that brings great fortune.” It is a form of gye, a traditional private savings group whose origins predate the Three Kingdoms period (57 B.C. to 668 A.D.). Its unique tradition of mutual help still exists today. 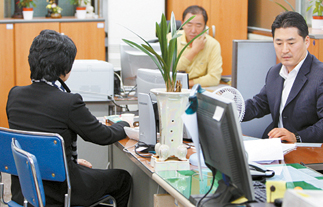 A woman identified only as Yun, left, who organized a wealthy private savings club called Dabokhoe, is investigated by Gangnam police for fraud and embezzlement. [YONHAP]

It is legal to organize a gye among friends and community members of similar interests. In modern times, most are formed by three or more housewives. The group decides on its leader and specifies rules - such as its purpose, the amount of money each member contributes monthly and the order in which members receive the accumulated monthly funds.

Decades ago when banks weren’t as convenient as they are now, gye members looked forward to the day they would receive the lodged funds. Most spent the sum sending their children to school or marrying them off. Some even bought their first homes.

In the case of Dabokhoe, each of the about 500 members contributed at the least 1 million won ($678) a month and up to 25 million won. The total amount of money changing hands since the group started is 220 billion won, according to the Gangnam Police Station. All monthly financial transactions were recorded in thin, red checkbooks with “luck” written on them in Chinese characters on the front page. The books were a symbol of affluence and authority among the wealthy.

In fact, the members of Dabokhoe are alleged to be the wives and relatives of high-ranking officials and entertainers. When Yun, the 51-year-old leader, founded the group in 2001, she convinced the upper class to join by naming renowned and trusted public figures who were already members. But most members weren’t aware of who else belonged since the group was managed secretly. Yun began calling the group Dabokhoe in 2004. 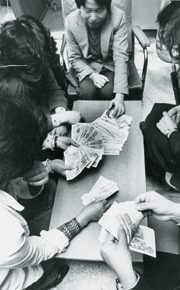 The police began paying attention to the group when Yun disappeared one month without paying the month’s accumulated savings. Members filed complaints at the Gangnam Police Station and Yun turned herself in early last month. While being investigated, she said she fled after other Dabokhoe members threatened to take control of the group’s savings.

Also, as the economy turned sour, Yun said many members could not afford to pay their regular installments. In order to make up the amount, Yun turned to loan sharks for cash, which left her with huge interest burdens.

Yun has been arrested for fraud and embezzlement and the case has still not been settled. It has been sent to prosecutors for an in-depth investigation.

Lim Yun-tae, a legal spokesman for the Dabokhoe victims, says he receives some 20 similar cases each year, though they are much smaller in scale.

The written rules of the Geumranbanwolhoe, the oldest existing gye in Korea.

“The Dabokhoe case is the largest and involves huge amounts of money,” Lim said.

Currently, 132 Dabokhoe members have filed complaints through the lawyer claiming a total loss of 33 billion won. A majority of the victims are housewives whose monthly installments were less than 30 million won.

Lim said high-ranking officials and celebrities who were members haven’t filed suit yet because they don’t want their names released to the public.

While trust is the most important and basic code in a gye, “the Dabokhoe case is an open consequence of when trust was broken,” Lim said.

In the old days, it was rare that members broke the gye agreements. It was hard to get away with deception since most unions were formed among close community members who rarely moved. If a member cheated others, rumors would rapidly circulate through the village targeting the dishonest person. Honesty was a natural result.

The purpose of private unions centuries ago was human networking and promoting fraternity rather than making money. Regular meetings among members were to create a spiritual interdependence among townspeople rather than to collect a large sum. 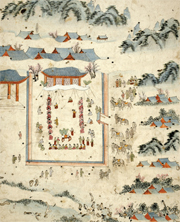 Members from a gye in Andong, North Gyeongsang, meet in 1602. [JoongAng Ilbo]

According to the Encyclopedia of Korean Culture, the history of gye goes back to the ancient Korean kingdoms of Goguryeo, Baekje and Silla, though exact dates are unknown.

Common people with similar lifestyles and hobbies spent time together as a means of mutual aid. In an agrarian society, farmers formed cooperative groups to work in each other’s fields during busy harvest seasons.

Also, when families held funerals, cooperative groups collected money and helped cover the expense. Funerals were big events at the time and meant providing a feast for the whole village.

There was no official data on gye, however, until 1938 when the Japanese colonial government in Korea conducted research. The Japanese wanted to restrict all private financial unions since they created unity and intimacy. According to the research, there were 480 different types of credit groups that numbered up to 30,000 during the Joseon Dynasty. Forming a gye was a general cultural activity back then.

Though different by type, the basic purpose was mutual aid, benefit and unity. Investments were made not only with cash but also grain, land and farm animals.

Unlike today, most gye members during the Joseon Dynasty were men of high birth rather than housewives.

The oldest existing gye is the Geumranbanwolhoe, a study group formed by 15 yangban, or noblemen, in Gangneung, Gangwon Province. The group was founded in the mid- 15th century during the reign of King Sejo of Joseon (1417-1468).

The members of Geumranbanwolhoe were in their early 20s and shared information mostly about state examinations. Their purpose was to win government positions. They met four times each year at Geumran Pavilion near Gyeongpo Lake, consoled each other in times of misfortune and pursued deep friendships. Geumran in Chinese characters means “orchid’s fragrance,” which members said described their friendship. Members paid a small fee each time they met.

Geumranbanwolhoe also met with private scholastic unions from other areas like
Gyeongsang Province.

The cooperative was very efficient. Lee Kyu-dae, a professor of history at Kangnung National University in Gangwon Province, says all 15 members passed the first round of the state exam and eight passed the final, based on his research.

One of the 15 original papers on which members wrote the gye’s rules is preserved at the Ojukheon and Gangneung Municipal Museum in Gangneung.

Until this day, the members’ descendants - mostly the eldest sons - meet four times a year and discuss the life principles and fidelity once pursued by their forefathers. Carrying on the tradition, however, is not easy.

Unlike many private savings groups whose purpose is to make money, Kim says the 560-year-old Geumranbanwolhoe is different.

Bae Young-soon, a professor of history at Yeungnam University, agrees. He says only the shell remains for many gye today.

“Private savings groups pursue too much financial gain rather than sharing hobbies and thoughts like in the past,” Bae said.

Nevertheless, he says pursuit of money through private unions is a natural development these days since it’s become more difficult to get loans from banks. Forming private financial groups is inevitable in such an environment.

“In any circumstance, a private savings group should be based on trust. It’s an agreement made among members. There are duties and rules,” the professor said.

Money you install monthly at a savings group isn’t subject to tax and it leaves no record. To many, it is the best way to manage their money.

“You can receive large sums of money and pay it back in monthly installments with less interest,” Jeon said.