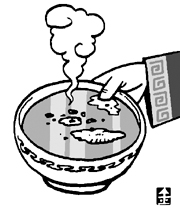 There is an old saying from ancient China that if you cannot have the soup, dip a finger into it. The proverb comes from a story involving a duke in the Zheng state during the ancient Chinese Spring and Autumn Period.

Duke Ling received a fine large turtle as a gift and decided to throw a banquet. Upon invitation, two lords entered Ling’s courtyard. While they were having a conversation, the index finger of one of the lords, named Zi, began twitching. When asked why, Zi answered, “My finger does this whenever it smells something delicious.”

Once they were in the duke’s courtyard, they were pleasantly greeted with a magnificent turtle soup dish. The two guests immediately burst into laughter. Taken aback by the sudden uproar, Ling asked them what was so humorous. They then told the duke about Zi’s remarkable finger.

Not impressed, Ling intentionally did not serve the dish to Zi. After watching the other guests savor the delicacy, Zi stood up, went to the large soup bowl, dipped his index finger into it then calmly left the room smacking his lips in satisfaction. Furious at Zi’s insolence, Ling attempted to have him killed, but the man with the remarkable finger acted first and Ling was assassinated instead.

The story, recorded in ancient history books, led to the finger-dipping proverb, whose meaning is akin to saying, “It is easy to despise what you cannot get.”

Zi’s story may be similar to Aesop’s fable about the fox who walked away after several failed attempts to reach a bunch of grapes, saying, “I’m sure the grapes are sour.”

The government’s North Korea policy is unstable. Of course, opponents are free to criticize, but former President Kim Dae-jung’s recent attack on President Lee Myung-bak went too far. Kim blamed Lee for intentionally wreaking havoc on inter-Korean relations. He recommended that the opposition camp forge a coalition to sustain his Sunshine Policy of engagement with the North.

It appears Kim has gone beyond simply sharing his wisdom as a former president. He cannot argue that engagement is the only policy for North Korea. The current administration is right to think there are areas in the policy that need rethinking.

Another former president, Kim Young-sam, also joined the political scrum, calling Kim Dae-jung names. Although the two Kims are over 80 years of age, they still appear to be missing politics.

Perhaps their fingers have special powers like Zi’s - except theirs twitch at the scent of a political scandal. Let’s just hope they don’t spill the bowl altogether.