An enchanting (and enchanted) tale from a master

An enchanting (and enchanted) tale from a master 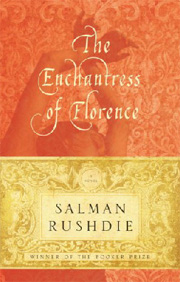 The Enchantress of Florence

Salman Rushdie’s latest novel may be called “The Enchantress of Florence,” but the recently knighted writer casts some spells of his own in this rich, fantastical story. He writes early in the novel, “witchcraft requires no potions, familiar spirits, or magic wands. Language upon a silvered tongue affords enchantment enough.”

And this is exactly the kind of literary wizardry that the author accomplishes within the pages of this masterpiece.

In interviews, Rushdie has said that The Enchantress of Florence is his most-researched book, and its content and bibliography corroborate this point. Renaissance Florentines, from the Medicis to Vespuccis to Macchiavelli, float through its pages.

Settings span the Mughal, Ottoman and Persian empires. Details are finely described, up to minutiae: “The real city, built of wood and mud and dung and brick as well as stone, huddled beneath the walls of the mighty red stone plinth upon which the royal residences stood. … Here was the silversmiths’ street, there the hot-gated, clanging armories, and there, down that third gully, the place of bangles and clothes. To the east was the Hindu colony and beyond that, curling around the city walls, the Persian quarter, and beyond that the region of the Turanis …”

The center of the story, as revealed in the title, is a woman of powerful beauty. She, too, falls into the theme of transcending place and time, emerging under such varied monikers as Qara Koz, Angelica and Lady Black Eyes, as if a reincarnated being.

She is the vehicle through which the story travels, originating first in the Mughal empire, where she’d been born into the royal family. But like all women of the 15th and 16th centuries, Qara Koz, enchanted as she may be, is limited by the confines of her sex. Thus, she is constantly reinvented as a possession of a man, often won as the spoils of war.

She comes to Florence via Argalia, an Italian-born general who has stayed away from his homeland so long that he is referred to as a “Turk.” Argalia is the third to “own” her, next after a Shah Ismail who loses her in battle.

But her new master knows that she is an elusive, fleeting possession: “Yes, I have you, but only until I don’t,” he thinks to himself. “Only until you choose to leave me as you left your sister, to change horses again as you changed from Shah Ismail to me.”

Rushdie weaves a complex web of fairy tales around his enchantress, whose whimsical spells range from conjuring mandrake roots from the ground, bewitching her appearance into the reflection of a magic mirror from afar and willing a civilization-ruining drought within the course of a day.

But in addition to entertaining his readers with such captivating tales, the author is able to skillfully pin down the human condition in his words.

Upon losing Qara Koz, Rushdie writes that Shah Ismail “swung between profound sadness and debauchery on a scale that showed everyone his weakness and the depths of his despair.” The description so aptly captures grief, whether it be in 1500s Persia or 21st-century Seoul.

The Enchantress of Florence shows Rushdie’s remarkable grasp of the English language, and the novel requires close reading, with plenty of time to devote to drinking in the artfully stitched-together words. The work is by no means an easy read, but a rewarding one that challenges the mind and imagination.

Toward the novel’s conclusion, Qara Koz enraptures a bard, who writes of her so that “the princess was actually entering the book, moving out of the world of earth, air, and water and entering a universe of paper and ink.”

And in Rushdie’s hands, this fictional event becomes reality.

The Enchantress of Florence