A sneak peak at the L.A. Phil’s rising star

A sneak peak at the L.A. Phil’s rising star 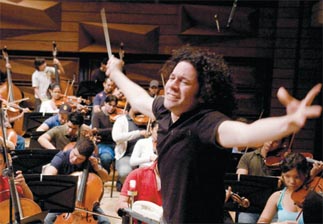 Gustave Dudamel and the Simon Bolivar Youth Orchestra will be in Korea next week. Provided by the organizer


He may not look like your typical classical musician, especially with his big, curly hair.

But the world has its eye on this young Venezuelan conductor, Gustav Dudamel - awestruck by what he does and dying to get more of him.

Dudamel, just 27, is set to lead the Los Angeles Philharmonic next fall.

The news made headlines when it was announced last year as it is exceptional for such a young conductor from a developing country to take the helm of one of the leading orchestras in the United States.

And next week, Koreans will get a chance see for themselves if he really lives up to all that hype. Dudamel and his orchestra, the Simon Bolivar Youth Orchestra, will be coming to Korea as part of their Asia tour.

“The important thing is how to make music, the way you make music, to enjoy, to have fun, and to have magic moments in every concert that we play,” Dudamel said in an e-mail interview.

Dudamel is the poster child of Venezuela’s National System of Youth and Children’s Orchestras, El Sistema.

The program has educated thousands of young musicians in the country since 1975, rescuing them from poverty, broken families, alcohol and drugs.

It has spawned about 200 youth orchestras in Venezuela, emerging as the model for many other countries.

“It’s not only the people who are playing the instruments in the orchestra in Venezuela, it’s also the people sitting in the audience,” Dudamel said.

“Some think classical music is old music, grandfather’s music. But this is absolutely not true! When they feel that little fire [inside], or a huge fire on the stage, they fall in love.”

The son of a trombonist, Dudamel began studying to be a conductor at 15. In just two years he became music director of Venezuela’s Simon Bolivar Youth Orchestra.

At 23, he won the Gustav Mahler conducting competition in Germany, which led to his Los Angeles Philharmonic debut the following year in 2005.

The Simon Bolivar Youth Orchestra will be playing Bernstein’s Symphonic Dances from West Side Story and Mahler’s Symphony No. 1 in D major on Dec. 14, and Tchaikovsky’s Symphony No. 5 in E minor Op.64 and Ravel’s Daphnis and Chloe Suite 2 the following day.