Playing along with a child’s outback dreams

Playing along with a child’s outback dreams 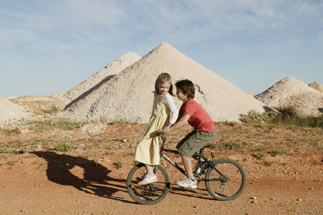 I’m very much a fan of keeping kids from growing up too fast, and it appears the makers of the charming Australian film “Opal Dream” agree with me.

The film, produced by the U.K. Film Council, tells the story of a young Australian girl, Kellyanne Williamson (Sapphire Boyce), and the profound impact her imaginary friends have on her family and their rural town.

Told through the point of view of her precociously sensible brother Ashmol (Christian Byers), the story unfolds against the backdrop of opal mining, the town’s main industry. In such a dry, hardened landscape, it seems that the majority of the townsfolk and young Kellyanne have their very separate sources of whimsy. The opal chasers, the Williamsons included, dream of striking an underground vein of the gemstone’s brilliant iridescence. But, as Ashmol narrates in the film, Kellyanne dreams while she’s awake, living in a fairyland where her imaginary friends Pobby and Dingan reside.

But when Pobby and Dingan go missing one day, despite her parents’ best efforts, Kellyanne is inconsolable. At wit’s end, her father Rex (Vince Colosimo), an unsuccessful opal miner, goes to the site where the duo was last “seen”: his claim of land.

As Rex “searches” alongside Kellyanne, she directs him toward a neighboring plot, which happens to belong to Sid, a suspicious, violent curmudgeon who accuses him of “ratting,” or poaching on another’s claim.

Of course, Rex’s explanation of searching for his daughter’s imaginary friends doesn’t appease Sid, nor the local police. Thus, the Williamsons, wrongfully tagged as “ratters,” are thrust into the unforgiving persecution of their neighbors.

Kellyanne’s sweet mother, Annie (Jacqueline McKenzie), loses her job; Rex is notified of his hearing with a magistrate and Ashmol finds himself mercilessly teased by cruel children.

Yet Kellyanne, despite being oblivious to the world of opal mining, suffers the most. In the absence of her friends, her physical condition rapidly declines.

At this point, young Byers begins to shine. As Ashmol, he is convincing in his exasperation with Kellyanne, yet becomes an effective kid hero when he’s willing to risk his safety and reputation to help his little sister. The two accomplish a tag team effect: impish Boyce is the star of the first act, then Byers saves the day.

Opal Dream never delves into the CGI-heavy visual imagination of such otherworldly films as “Bridge to Terabithia” or the “Harry Potter” series. Instead, it remains firmly rooted in real life. Even so, the poignant resolution of the story strikes the right tone of fancy for Kellyanne’s character, yet remains appropriately commonsensical for its dusty outback setting.

Other, more worldly viewers may find the parenting of the film perplexing. At times, some may want to simply shake Kellyanne out of her emotional malaise, as her rugged father tries to do in several conversations.

But in Opal Dream, there’s a way to navigate the fantastic imagination of a child - playing along. Here, as Ashmol goes through great lengths for the sake of his little sister, the mundane becomes magical.