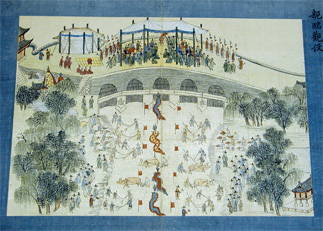 This picture depicting the 1760 restoration of Cheonggye Stream comes from the “Juncheongyecheop,”a rare book from the Asami Library. [JoongAng Ilbo]


It’s June 22, 1874, and a gisaeng, a traditional female entertainer, dolefully sings of her past loves at a banquet held beside the Geumgang River in North Jeolla.

“Strange, strange. My fate is strange./ A goodbye last year, another goodbye this year. Farewell, my love./ Encounters and separations are so frequent./ I vow there will be no other now that I’ve said goodbye to my love.”

This is an excerpt from a song by a well-known gisaeng named Hyeongsanok from Gongju, South Chungcheong. Hyeongsanok, who was also an expert at the traditional Korean sword dance, won a singing contest that day with this song, the lyrics of which are preserved in a book called “Yeomyo (Beautiful Song).”

This precious publication is part of the Asami Library, a collection of 4,013 classical Korean imprints and manuscripts mostly from the 16th to 18th centuries housed at the C.V. Starr East Asian Library of the University of California, Berkeley. 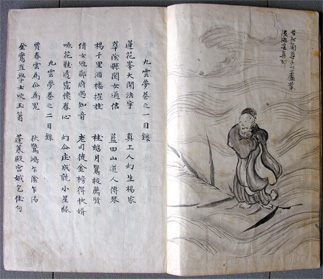 “Guunmong,” a novel from the 17th-century Joseon Dynasty written by Kim Man-jung, is kept in the Asami collection.

According to Oh Yong-seob, a professor of library and information science at Incheon City College, it’s hard to find songs written and performed by lesser-known gisaeng, although many of them have a high literary value.

Oh has recently published a book called “Books That Weren’t Returned” about the research at the library. He’s been involved in this project since 2005.

So how did this notable compilation of rare Korean books end up in a U.S. library with a non-Korean name?

According to Cheon Hye-bong, a bibliographer and former professor at Sungkyunkwan University who helped to catalog the Asami collection in 1995, the collection was started more than a hundred years ago.

Rintaro Asami (1869-1943) was dispatched to Korea as a law official in 1906 when Japan began to extend its influence in Korea, culminating in the annexation of this country in 1910. A big fan of Korea’s ancient culture, Asami bought books from Korean royalty and scholars during his stay.

“Asami was particularly interested in the history of Korean law,” Cheon said. “Using the large number of old books he’d amassed, he wrote his dissertation on Korean legislation for his doctoral degree at the University of Tokyo.” 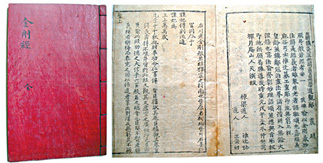 “Cheollogeumganggyeong,” a record of Buddhist scriptures.

Thirty years later, the UC Berkeley East Asian Library purchased the collection. UC Berkeley was keen on developing its East Asian studies program, and today, it houses more than over 900,000 volumes on East Asian literary classics, philosophy, history and rare Chinese, Japanese and Korean imprints from the past.

Researchers say the Asami collection is one of the best preserved ancient Korean texts taken from this country and stored overseas.

According to “Elizabeth Huff, Teacher and Founding Curator of the East Asiatic Library: from Urbana to Berkeley by Way of Peking,” a book by Elizabeth Huff (1912-1988) who looked after East Asian books at the Starr Library in the mid-20th century, the library officials hired a Japanese expert to bind the old books in 1956.

The Asami collection houses many rare records that can’t be found in Korea or anywhere else in the world.

“Juncheongyecheop,” a book written in 1760, records details of the massive restoration of Cheonggye Stream that took place that year during the reign of King Yeongjo (1694-1776).

According to the book, about 215,380 people participated in the dredging of the stream from February to April. The king was so impressed by the job that he commissioned the book so that future generations would know what was achieved.

An exceptionally fine copy of Juncheongyecheop, which scholars believe belonged to the king, in part of the Asami collection. It includes detailed colored drawings of the dredging operations that are still vivid today.

The Asami also houses “Cheollogeumganggyeong,” a record of Buddhist scriptures. Three copies kept in Korea are designated as treasures, as indeed are “The Memoirs of Lady Hyegyeong,” the autobiography of Queen Hyegyeong (1735-1815); and manuscripts by Jeong Yak-yong (1762-1836), a prominent Korean religious philosopher.

Not many Koreans were aware of the existence of the Asami collection until KBS-TV aired a documentary in 2006. Since then there have not been any significant steps taken to repatriating the works, and it is not clear what actions, if any, will be taken in the future.

One insight comes from Kim Byeong-yeon, an official in the international affairs division of the Cultural Heritage Administration, a government organization that overlooks cultural properties in Korea.

“Just because the books are ours doesn’t mean they should be returned to Korea. That’s not the way we view the issue,” Kim said. He didn’t comment on whether or not government-level attempts to repatriate the collection have taken place.

Lee Jong-muk, a professor of Korean literature at Seoul National University, takes the view that the books might better serve Korea if they are kept where people will read them overseas.

“I don’t think the matter of ownership is the issue here, but a matter how cultural heritage is used. I think the Asami collection at Berkeley can help promote Korean studies overseas and be of better use to more people,” Lee said, adding that the National Library of Korea owns microfilms of the collection.

There have been moves to rename the collection. Lee joined a campaign in 2006 led by Chang Jae-yong and Oh Yong-seob plus Jo Seong-taek, a philosophy professor at Korea University, to replace Asami with a Korean name.

The University of California, Berkeley, said it could only comply if the Koreans could find a donor willing to fund the cost of a new library, but they were unable to do so. The U.S. university said that since the collection is private, the name can’t easily be changed.

Lee said he has no regrets as the Japanese name also reflects a part of Korean history.

Meanwhile, researchers at Korea University’s Institute of Korean Culture have embarked on a 10-year project to digitalize old Korean documents currently kept overseas in a bid to make the texts more freely available to other researchers and the general public. They chose to start at the Asami Library.

The project is financed by the education ministry and overseen by the Academy of Korean Studies.

“There are many rare documents and single-copy manuscripts in the Asami collection, making it very valuable for academics,” said Sim Gyeong-ho, a professor at Korea University who will be participating in the digitalization project. “These records are crucial for understanding the literary and intellectual history of the past.”

Earlier this year, Sim unveiled the results of his latest study of the Asami Library and other old Korean books kept at the University of California, Berkeley, at a special lecture at Yonsei University.

“We believe an estimated 17,000 ancient books and written records have been transferred overseas. Since it’s a vast amount, I think the priority is to get a comprehensive list and sort out those that are the most valuable,” Sim said.

Sim’s team hopes to create a better catalog, not just of the Asami collection, but of all these documents.

Different organizations like the culture ministry, National Institute of Korean History and the National Research Institute of Cultural Heritage have drawn up a list, but it is not definitive.

Since 2004, the National Research Institute of Cultural Heritage has listed 6,500 old Korean records that are kept abroad at its Web site http://koreanbooks.nricp.go.kr.