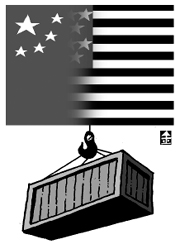 In the mid 1980s, a British pharmaceutical company, the predecessor of Glaxo Wellcome, began clinical trials for antidepressant medications. Surprisingly, all smokers who participated said that their desire for tobacco disappeared. The studies proved that nicotine and antidepressant drugs play a similar role.

Nicotine-induced dopamine release is what causes people to become addicted to cigarettes. Without a strong determination to break away from the familiar pleasure, it will be difficult to recover from nicotine addiction.

But smokers are not the only ones struggling to beat a dependency as a New Year’s resolution. The U.S. and China, which have led abundant lives over the past decade, thanks to each other, are now in similar situations. American consumers lulled China into contentment. The Chinese economy continued to see two-digit annual growth thanks to U.S. consumers. China invested huge sums from manufacturing exports in U.S. government securities. Americans borrowed money and rushed out to buy big houses and cars to flaunt their wealth. Both the U.S. government and the people indulged in the good life by borrowing money from others.

The phenomenon of the two nations becoming addicted to each other was coined “Chimerica” by economist Niall Ferguson. Chimerica is in the spotlight as a major culprit behind the global economic meltdown. Recently, The New York Times pointed out that, “The Chinese have piled up so much excess savings that they lend money to the United States at low rates, underwriting American consumption ... fueling a historic consumption binge and housing bubble in the United States.”

However, it is ridiculous to argue who should be more responsible. Fareed Zakaria writes in his book, “The Post-American World,” that the symbiotic economic relationship between the U.S. and China is globalization’s equivalent of the nuclear age’s so-called mutually assured destruction, in which both the U.S. and the Soviet Union, armed with nuclear weapons, rather resisted nuclear war. He insists that the growth of Chimerica is a mirage, just as mutual assured destruction failed to achieve true peace.

No matter how painful, the U.S. and China must beat their addiction. Experts suggest that the U.S. should reduce its current account deficit by improving its ability to compete in export markets, and that China should prevent the nation’s economic slowdown caused by stalled exports by fostering consumption.

Beating their dependency will not be easy, but will definitely serve as a cure-all for the global economy as well as the two nations.