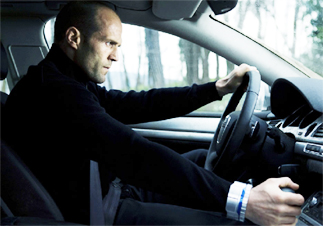 Jason Statham as driver Frank Martin behind the wheel of his Audi A8 in “Transporter 3.”

As the beautiful heroine regains consciousness after an accident and lays eyes on her masculine hero for the first time, she asks “Am I in heaven?” Returning her gaze, the stoic savior pauses, then responds in a manly baritone voice, “Actually you’re in the shit.” And so begins “Transporter 3” - the latest in the B-grade action movie series - with the promise of no romantic subplot (or any plot) to get in the way of fast cars and flying fists.

For those unfamiliar with the Transporter series, imagine a low-cost James Bond: an Audi for an Aston Martin and a balding delivery man instead of a suave, Eton-educated secret agent.

But labeling Jason Statham’s Frank Martin a poor man’s Bond misses the point. His deadpan, I’m-not-trying-to-be-charming-or-funny delivery is, well, charming and funny, and the perfect fit for this cheaply made high-adrenaline series which has become a Euro-centric anti-Hollywood blockbuster.

Frank is, as always, the black suit-wearing driver forced to deliver a “package” - joined this time by Valentina (Natalya Rudakova) the daughter of the Ukrainian environmental minister - who is being held hostage by an evil corporation that wants to dump toxic waste.

Perhaps running low on ideas for a series that really shouldn’t have made it as far as a second sequel, the aptly named action director Olivier Megaton, does the unthinkable and introduces some romance (and I use the term loosely) which results in such sparkling repartee as “You’re the gay!” “No, I’m not the gay” between Valentina and Frank after he rejects her sexual advances.

Generally screenwriters should refrain from using words like “kaboom” in any script, even action films, but the clunky dialogue, which is mangled by actors who can’t speak English, gives the film an endearing quality. In fact it’s this quality of not taking itself seriously which makes the film work on some low level.

As expected, the film’s real star is the black Audi A8. Sure Transporter verges on being a 100-minute-long car advertisement with shameless close-ups of the Audi logo edited into the high-speed car chases as the A8 outmaneuvers a Mercedes, but one shouldn’t criticize the editor, who does some amazing work.

The way the erratically chopped-up fight scenes are cut is, to my eyes, cinematic brilliance, even though panned by most film critics. But when you’re shooting an action film on the same budget “The Terminator” spent just on Arnold Schwarzenegger’s protein shakes, the jump cuts, random speeding up and slowing down of the film, close-ups and missing frames show just how to make low-budget fight sequences look good as 20 evil henchmen wait politely in turn to get beaten up one by one by the hero.

Later when Frank finds himself in a tight situation and asks, “What do you suggest I do?” he is simply told to “drive faster.” These lines could just as easily have been taken from a conversation between producer and director deciding what direction the third film should take. It may be the weakest of the three in the series, but the Transporter does drive fast.