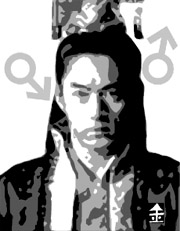 The Sacred Band of Thebes was an elite army in Thebes, a city state of ancient Greece, consisting of 150 pairs of homosexual lovers.

They were reputed as unrivaled in battle until they were annihilated by Macedonian troops led by Alexander the Great, in 338 B.C. According to historian Plutarch, “a band cemented by friendship grounded upon love is never to be broken, and invincible; since the lovers, ashamed to be base in sight of their beloved, and the beloved before their lovers, willingly rush into danger for the relief of one another.”

History has shown that some armies emphasizing masculinity have had homosexual connections. Among the five guiding principles for the Hwarang, an elite group of male youth in the Silla Dynasty, some people maintain that one of its five commandments, “faithfulness to one’s friends” implies more than its literal meaning.

The film “Ssanghwajeom,” which premiered late last year, saw more than 1.5 million viewers in its first week of release, and has caused a furor.

The film explicitly depicts a homosexual relationship between a Goryeo king (played by Joo Jin-mo), and his bodyguard Hong-rim (Zo In-sung). A controversy has arisen over whether the homosexual relationship, played by handsome actors, was a cunning marketing ploy or a justified interpretation. Some argue that the film misrepresents the king.

If we assume that the king in question was Gongmin, the film’s major features are remarkably true to historic records. After the death of his Mongolian-born queen, Noguk, King Gongmin descended into a life of homosexual debauchery, hiring a team of handsome male bodyguards of noble birth to serve in the palace in 1372.

This was a tragedy in the making. One of the bodyguards made King Gongmin’s second wife pregnant. Gongmin tried to kill him to quell the scandal, but was killed by the bodyguard’s friends instead.

So was King Gongmin homosexual? Some historians insist that he was slandered in an attempt to justify the founding of the Joseon Dynasty, and that the youths were just bodyguards. This is an equally plausible interpretation, considering the social atmosphere of the time.

These arguments are all based on the viewpoint that homosexuality is a sin. If historians of the future lived in today’s world, where “Ssanghwajeom” has been the talk of the town since its release, and where kissing scenes between handsome actors are regarded necessary for female viewers, what would they think?


The writer is an entertainment news editor of the JES.