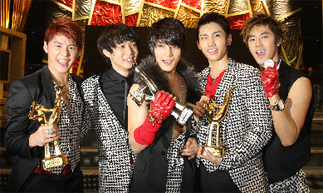 Is it a covert intelligence operation? Or perhaps a film shoot?

At the arrival gate at Gimpo International Airport, five men elbow their way through a mob of screaming fans. Despite the presence of bodyguards, they barely make it to their black van parked outside. The van immediately takes off and a dozen cabs quickly trail behind.

The five are members of Dong Bang Shin Gi, a popular Korean boy band also known as Tohoshinki in Japan and TVXQ in other Asian countries.

Many people find their schedules full of engagements at the end of the year, but their idea of being busy would pale in comparison next to the itinerary of a pop group like Dong Bang Shin Gi.

After a rehearsal for a year-end pop award ceremony in Tokyo, Dong Bang Shin Gi came to Korea briefly on Dec. 29 to appear in a local pop show.

The next morning, they flew back to Japan to receive an award at the 50th Annual Japan Record Awards. Then on Dec. 31, they appeared in a New Year’s Eve annual music show called “Red and White Song Battle” produced by NHK.

For stars, this crazy schedule is one indication of their worldwide fame.

Here are excerpts from an interview with Dong Bang Shin Gi conducted in their van.

Q. How has your latest song “Mirotic” changed you?

How do you feel about the fact that the song has been categorized as “harmful material for teenagers” by the censoring committee recently?

(Micky) I don’t agree. So it’s really regrettable. We performed the clean version of the song at the Golden Disk Awards with revised lyrics. But we felt that version lacks the original color of the song. I’m sure people listening felt the same way, too. (On this issue, refer to the Dec. 16 issue of the JoongAng Daily, pages 1 and 6).

It’s been five years since your debut. It seems like you are growing fast.

(Xiah) We cannot take credit for all we’ve achieved. In a metaphorical sense, we are just enjoying a meal prepared by others.

Of course, we try our very best in doing so, working to present the best of us at all times. In that sense, I guess you can say that we are “eating with golden spoons.”