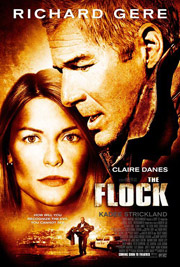 Claire Danes and Richard Gere star in “The Flock.” [MovieWeb]

I’m not much of a fan of lists. A to-do list can be slightly bothersome, the Web site craigslist.com positively annoying and the film “The Bucket List” downright painful.

But as far as lists go, the most unpopular list ever must surely be the sexual offender list.

But at the risk of sounding too flippant, such revulsion can make for great film fodder, especially in thrillers.

So how did “The Flock,” a film starring Richard Gere and Claire Danes, about convicted sex offenders and a vigilante cop who tracks them down, end up going straight to DVD in the States?

Erroll Babbage (Gere) has devoted 20 years of his life to keeping track of registered sex offenders for the department of public safety. The years haven’t been kind, either. With a bad haircut and an unfashionable wardrobe (complete with a Members Only jacket - a favorite among costume designers for alcoholic cops) Gere looks as depressed as his character is.

With complete disregard for the danger of cliches, director Lau Wai-keung (“Internal Affairs”) picks up the story as the angry Babbage gets forced into retirement from the job that has consumed his life, leaving him drained and contemptuous of his flock of sexual predators.

To make his last couple of weeks even more unbearable, Babbage’s unsupportive boss makes the brooding officer train his replacement. Allison Lowry (Danes), a young bright-eyed, by-the-book type, has the impossible task of taking over a job that seriously messes with your head and your social life.

Then, when one of his flock strays and abducts a girl, the film kicks in as Babbage makes his last stand, determined not to go out with more blood on his hands.

Although few mainstream films have tackled this murky sexual subject, compared to the 1999 Nicolas Cage movie “8MM,” “The Flock” would be lucky to measure up to 3 millimeters.

Whereas 8MM shot straight into the darkness of perversion and pornography, The Flock just gets its toes wet.

This is primarily where the film fails - it doesn’t do enough to make viewers feel truly uncomfortable. Lau seems afraid to take The Flock from humdrum suburbia to full-blown disturbia.

The sexual tension bubbling within Babbage meekly evaporates, which is disappointing considering Gere’s tortured performance. An inappropriate relationship with Danes could have successfully complicated the simplistic plot, as her character is basically pointless.

Lau tries to set up a “Se7en”-like climax, but only manages to take the thrill out of a thriller, leaving us without a villain we can fear and despise with a level of revulsion befitting the crime.

When you wipe away the filth, there’s not much else worth seeing.