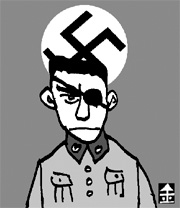 The new thriller “Valkyrie” released on Jan. 22 in Korea tells the story of an assassination attempt on Adolf Hitler, the leader of Nazi Germany, at the height of World War II.

The star of Valkyrie, Tom Cruise, who recently visited Seoul to promote the film, explained why he took the role.

“I wanted to let people know that not every German person acted like a puppet at that time,” he said.

Valkyrie is the English pronunciation of Walkure.

In Northern European mythology, a valkyrie is a flying goddess who leads dead war heroes to heaven. “Die Walkure” is also the second of the four operas that comprise “The Ring of the Nibelung” by Richard Wagner.

Hitler was fascinated by Wagner’s music, which was inspired by German mythology, as he thought it could ignite the national consciousness of the German people.

“The Ride of the Valkyries,” which opens the third act of the Die Walkure, was Hitler’s favorite, played through speakers attached to tanks as German forces advanced.

The Israeli conductor Daniel Barenboim broke this taboo when he performed Wagner on July 7, 2001 in Israel.

Many circumstances contributed toward this situation.

Barenboim, who has been highly critical of Israel’s hard-line policy against Arab countries, announced his plan to perform “Die Walkure” with tenor Placido Domingo in Jerusalem.

It’s no surprise that this decision angered bereaved families of people killed by the Nazis during World War II.

Pressure was put on Barenboim to change the program for the concert.

But on the day he announced that he would conduct Wagner’s opera “Tristan und Isolde.”

Despite vehement opposition, he held fast.

“We should no longer insist we are the only victims,” he said.

The Cruise movie shows that not every German fell under the Nazi yoke.

And Barenboim showed that not all Jewish people were against coexistence with the Arab world.

Over the years, the concept of Valkyrie has taken on layers of meaning and symbolism.

It’s a historical irony that music Hitler favored has become a source of inspiration for peace.

Now we turn to the harsh reality of events in the Middle East.

As the Israelis and the Palestinians find themselves in conflict in the Gaza Strip, we are reminded of Barenboim’s words and the many associations of valkyries.

The writer is an entertainment news editor of the JES.