New bill hopes to get off on a high note

New bill hopes to get off on a high note 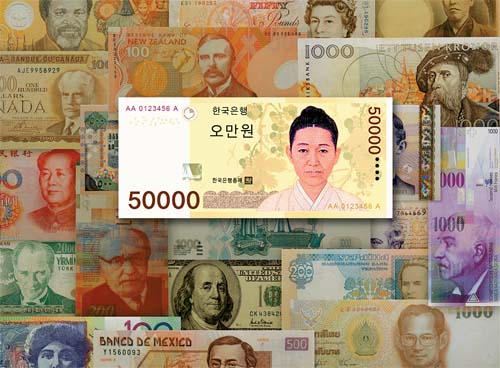 Korea will soon have a 50,000-won note, center, as its largest denominated banknote. It will be 154 by 68 millimeters in actual size. Featured is the Joseon-era writer Shin Saimdang. [JoongAng Ilbo]

Suppose you’ve just landed at a foreign airport, and exchanged a small amount of won into the local currency. If you’re handed a huge wad of bills, you would want to know why just a few bills had to be exchanged into so many notes and start wondering about the size of that country’s economy.

That’s what tourists may think when they come here.

One foreign travel guidebook on Korea contains the following bit of advice: If you change money into Korean won, you’ll receive a stack of banknotes and learn, much to your surprise, that the largest-denominated bill in Korea, 10,000 won, is worth less than $10 U.S. in today’s exchange rate.

But the hassle of carrying big piles of cash, not to mention questions about the size of our economy, is about to become history. As early as May, Korea will have a new 50,000-won ($36.40) bill.

Shin Saimdang, a 16th-century female writer and calligrapher, will be featured on the 50,000-won bill. More than 500 years after her birth, Shin will be back in the public eye as the first woman ever to appear on a Korean banknote.

In the 1960s, Korea had no need for large bills because people didn’t have enough to spend anyway. The 10,000-won bill was issued in 1973 as inflation outpaced economic growth.

The new note, in shades of light brown and yellow buff, will be six millimeters longer than the current 10,000-won note. The Korea Minting and Security Printing Corp. estimates that 440 million notes will be printed this year.

The 50,000-won note will be equipped with the latest anti-forgery measures. In addition to the optical variable ink and raised intaglio printing already used with the 10,000-won bill, the new anti-counterfeit technology will be “the best we’ve ever seen,” said a Bank of Korea official.

Experts predict the latest technology will be the U.S.-developed Motion, which uses micro lenses in a security strip that projects holographic images that move when the note is tilted.

The 50,000-won bill has had a long and not always pleasant buildup so far. Since the 1990s, proponents of the new bill have argued a large note could save a huge sum of money each year in the printing of personal checks, each of which is worth 100,000 won. 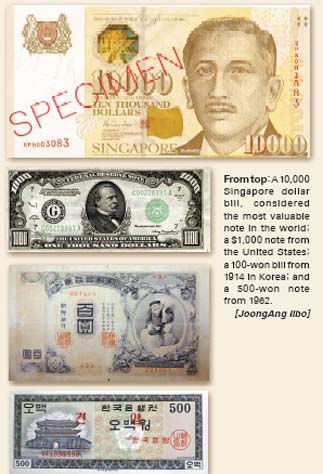 Opponents worry that the larger bill would tend to encourage bribery because it would become easier to stash a large amount of cash in smaller containers. They also say that with credit card use on a steady rise, the demand for cash isn’t enough to warrant issuing the 50,000-won bill.

Feminists even argued that selecting Shin to be featured on the bill reinforces archaic stereotypes about a woman’s role: Shin, for all her artistic accomplishments, was noted for being a devoted daughter and wife and a caring mother.

Choosing figures to feature on bills has been a contentious process here. When the Bank of Korea was founded in 1950, the image on its first note was then-President Syngman Rhee. He remains the only person to be featured on a note while still alive.

Political leaders gave way to historical figures like King Sejong and Admiral Yi Sun-sin. But as recently as last October, some conservative interest groups argued that the late President Park Chung Hee should be on the 50,000-won bill and Rhee should be on the 100,000-won note, which the central bank decided not to print after all.

Banknotes elsewhere in the world have presented various faces, such as national heroes and influential historical figures. For instance, Mao Zedong, founder of the Chinese Communist Party, appears on all five Chinese yuan bills, and the 10,000 Mongolian tugrik note shows Genghis Khan, who led the Mongol Empire in the 13th century. India’s 1,000 rupee shows Mahatma Gandhi, leader of the nonviolent nationalist resistance against British colonial rule.

Since the 1960s, all British banknotes feature Queen Elizabeth II on their front. She also appears on bills in Commonwealth nations such as Canada and Australia.

But some print images of animals to avoid political controversy. South Africa’s biggest denominated note, 200 rand, has the leopard, while other bills feature the elephant, rhinoceros, lion, buffalo and zebra.

South Africa’s F. W. de Klerk, who released Nelson Mandela and abolished apartheid upon becoming president in 1989, replaced a portrait of a white man, Jan van Riebeek - considered one of the nation’s founding fathers - and brought in the animals.

In Korea, Shin will be the face of the largest-denominated bill, and whether we like it or not, the new note will affect our lives.

The 10,000-won bill accounts for 90 percent of all bills printed in Korea, and the new note will bring more balance.

Lee Seung-yoon, of the bank’s currency issue department, said in some foreign nations, the largest-denominated notes account for about half of the entire print run, and added, “the 50,000-won note will attain about the similar status in Korea.”

While banks will be forced to change their automated teller machines, companies who make those machines will more than gladly handle the extra work. The central bank has pledged it will help local lenders fix their ATMs once the new note is introduced. 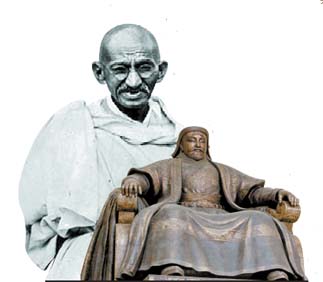 Mahatma Ghandi, background, and Genghis Khan, are among historic figures that appear on banknotes around the world. [JoongAng Ilbo]

The new note will have some practical impact, too. For the past 36 years, the nation’s largest note has been 10,000 won.

With inflation soaring, the number of bills issued per person rose from seven in 1975 to 77 in 2006. That meant stuffing more bills into our wallets. The new note will make our pockets lighter.

While the central bank doesn’t yet have specific estimates, having the new note is expected to save people time and hassle when depositing and withdrawing cash and when completing transactions in cash or checks.

Today, paying with a 100,000-won check requires holders to write their names and phone numbers and, in some cases, to show proof of identity.

But as critics have argued, 50,000-won bills could actually make it easier for corrupt politicians to transport illegal funds.

Since 2007, the Anti-corruption and Civil Rights Commission has argued against large-denominated bills because the negatives outweigh positives. Theoretically, the commission’s argument goes, you’d need only one-fifth the space to move illicit cash in 50,000s than you would with 10,000s.

The Korea Finance Intelligence Unit does plan to toughen supervision on large cash transactions, including lowering the threshold for reporting transactions from the current 30 million won to 20 million won.

But as Lee Bo-hyun, head of the unit’s compliance and regulatory division, points out, “There are definitely limits as to what we can do to supervise cash flow outside the confines of banks.”

But Lee Nae-hwang, head of the central bank’s currency issue department, believes there are enough upsides to justify the new note.

“Yes, there are some areas of concern, but given the size of our economy today, there are more positives,” Lee said.

“And as transparency in taxation and corporate accounting improve, we see less illicit funds or embezzlement nowadays.”

Another argument against the new note was that it could drive up inflation and spending. But Hanyang University economics professor Ha Joon-kyung begs to differ.

“When the euro was first introduced, similar concerns arose in some countries but none really happened,” he said.

“And since almost no one uses only cash, the new bill won’t really push up spending.”