“If the police come into the church, they will see me. Once they knock me down, they will see other priests and nuns. Only when they knock them down, too, they will find the students.”
- To police officials looking for student protestors in 1987 during the democratization protest 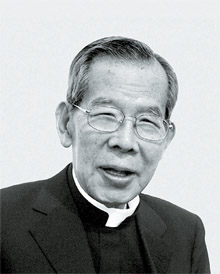 Cardinal Stephen Kim Sou-hwan was a key figure in Korea’s democratization and other social movements in the latter half of the 20th century. [JoongAng Ilbo]

“If I stand in front of God, I will ask for his forgiveness, saying, ‘I said I would be faithful to you, but I wasn’t able to. Please forgive this sinner.’”
- From his 2001 interview with JoongAng Ilbo


“I talked about love all my life. But I am afraid that I didn’t practice true love enough. I should’ve lowered myself more and wiped the tears of the poor more.”
- From his autobiography published in 2004


“I think I can finally sleep in peace. I’ve been feeling guilty and worried that because I am alive, because I didn’t go soon enough, I may have delayed the appointment of the new cardinal.”
- After congratulating Cardinal Nicholas Cheong Jin-suk, newly appointed in 2006

Kim Sou-hwan was deeply distressed. The question on the test paper for an ethics class read, “Write down how you feel about becoming an honored citizen of an imperial state mandated by the Emperor.” 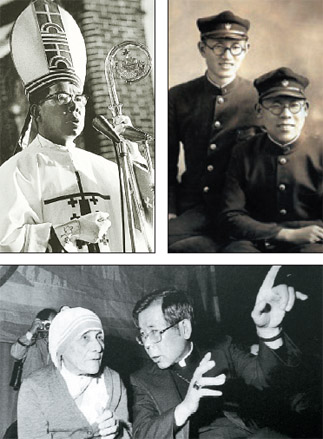 Counterclockwise from top left: Kim with his classmate Park Cheol at the Catholic University of Sophia in Tokyo, in 1941; Kim is made archbishop of Seoul in 1968; Kim guides Mother Teresa on a visit to Korea in 1981

The year was 1940, during Japan’s colonial rule over Korea (1910-1945), and Kim was a senior at Dongsung Commercial School (now Dongsung High School) in Jongno, central Seoul.

Kim spent a good hour agonizing over the test item, until he finally wrote, “I am not a citizen of an imperial state. Thus, I don’t have anything to say.” After the examiners checked his paper, Kim was taken to the principal’s office, where he was clapped around the face and told he would never be a priest. He was too subversive, he was told.

But Kim not only became a priest, he became one of the most respected spiritual leaders in Korea, a symbol of Korea’s social conscience during the tumultuous years following the end of the colonial period and the era of dictatorship.


Born to a Martyr’s Family

Kim was born on May 8, 1922 in Daegu, North Gyeongsang to Kim Yeong-sub (Joseph) and Seo Jung-ha (Martina). Kim was the youngest of eight children, who were all brought up in the Catholic faith, and a direct decedent of a martyr who was persecuted in Korea in 1868 for his beliefs.

It was actually Kim’s mother who propelled him toward the priesthood. She supported the family selling pottery, linen and cotton after her husband died when Kim was just 7. 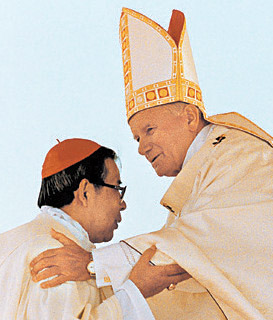 Kim’s original dream was to go into business, get married at 25 and become rich enough that he could buy his mother ginseng and other healthy foods by the time he reached 30.

Following his mother’s wishes, he entered St. Justin’s Catholic Seminary in Daegu, and then went on to Dongsung Commercial School, a Catholic institution in Seoul.

In 1941, he went to the Catholic University of Sophia in Tokyo, Japan. There, he met his lifetime mentor Theodore Geppert, a priest from Germany who founded Sogang University in Seoul in 1960. But in 1944, he was drafted and served until Japan’s surrender to the Allies in 1945.

Kim returned to Korea in 1946 and the following year, he entered the Catholic University of Korea. But in 1950 the Korean War (1950-1953) erupted, forcing him to flee to Busan to further his studies.


A Calling in the Disturbing History

Kim was ordained in 1951 at the height of the war. His motto was “God, I am a sinner. Please take pity on this sinner.” In subsequent years, he served as parish priest in Andong, North Gyeongsang and secretary to the bishop of Daegu, among other posts. 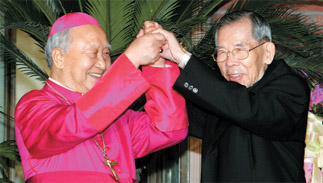 Between 1956 and 1964, Kim studied social sciences in Munster, Germany, where he was able to observe the Second Ecumenical Council of the Vatican that opened under Pope John XXIII in 1962 and closed under Pope Paul VI in 1965. The topics discussed, such as reform and harmony within the Christian community and with other religious communities, would come to shape his religious and social views in later years.

Kim came back to Korea in 1964 and was named bishop of Masan two years later. At the time, he was the leader of Young Christian Workers (now the Young Christian Movement) in Korea, and witnessed employers at Simdo Textile in Gwanghwa, Gyeonggi firing workers on his visit to the company.

“Regardless of the reasons, basic human rights must be protected. Thus, we will do everything we can to improve unfair, unjust labor-management relations,” Kim said in February 1968, marking the first time a Catholic leader in Korea had declared a commitment to social issues.


A Key Figure in Democratization

In 1968, Kim Sou-hwan was promoted to archbishop of Seoul and the following year named cardinal by Paul VI, becoming the first Catholic cardinal from East Asia and the youngest member of the College of Cardinals.

At the time, Korea was suffering under the burden of rapid industrialization and military rule. As a prominent spiritual figure, Kim was not immune to the political and social circumstances impacting the country. He soon became involved in promoting democracy and challenging the government of the late President Park Chung Hee.

At a Christmas mass in 1971, he strongly criticized Park for trying to extend his rule. The following year, he repeated the same message, urging freedom of the press, assembly and association.

“If other people had been permitted to speak about such matters, I wouldn’t have felt compelled to speak out,” the cardinal later recollected.

Kim continued to support the painstaking march toward democratization in subsequent years by holding services, issuing statements and sheltering student protestors, sending them though third parties to farming and mining communities considered safe.

“If the police come into the church, they will see me. Once they knock me down, they will see other priests and nuns. Only when they knock them down, too, will they find the students,” he said to a public safety officer who came to notify him that the police were planning to search Myeongdong Cathedral in downtown Seoul for students who took part in the street protests that rocked Korea in 1987.

Inspired by Kim, other priests began to play pivotal roles in the democratization movement and the cathedral become a sanctuary for dissidents hunted by the government.

Besides being closely watched and even wiretapped by the government, Kim faced some opposition from within the church, with some priests saying he was playing far too prominent a role on social issues.


His Role Bigger Than Ever

Kim Sou-hwan retired in 1998 and refrained from making comments on political and social issues. But the world did not forget about him. He was invited to give lectures and interviews by groups aware that his views mattered to the general population. He was so busy that he didn’t have time to fulfill his ambition to get his driver’s licence, and he rarely had time to go on the trips he dreamed about. He hardly even had the time for his only hobby: a weekly hike up Mount Bukhan.

Kim continued his prayers and charity work, remaining focused on the development of Christianity in Korea and the unification of the Korean Peninsula. In 2002, he set up a scholarship for priests who wanted to work on spreading Christianity in North Korea.

Looking back at his clerical life in his 2004 autobiography, Kim gave himself 60 out of 100.

“I’ve talked about love all my life, but I’m afraid I didn’t practice true love enough. I should’ve lowered myself more and wiped the tears of the poor more,” Kim wrote.

“Pro vobis et pro multis (For you and for many)’’ was the lifelong religious motto of the late Cardinal Stephen Kim Sou-whan, words that reflect his desire be a guiding light for the country and its people in times of adversity.

His mission now lies in the hands of others.