Finding interest in the ordinary

Finding interest in the ordinary 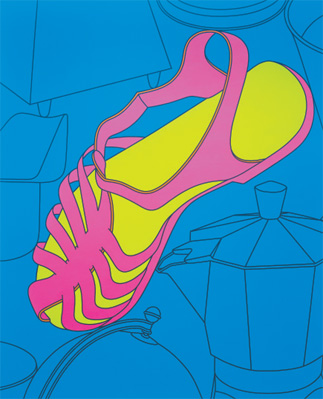 “Sandal” (2009) by Michael Craig-Martin. Provided by the organizer

Looking at British conceptual artist Michael Craig-Martin’s paintings, you can’t help but think that if only life were as simple as his works, people would be much happier.

The Dublin-born artist’s upcoming solo exhibition in Seoul will feature 20 of his latest acrylic paintings, including “Chair,” “Sandal” and “Lightbulb,” all of which were painted this year.

As these titles suggest, Craig-Martin, 68, draws out the fascination in everyday objects like office chairs, coffee pots and buckets. He renders the objects with thin black lines, and then fills the silhouettes in with striking colors like magenta, green, turquoise and red.

He finds conceptual beauty in the ordinary, he told The Times newspaper in the United Kingdom early this year. “What is really interesting is finding interest in things that are not automatically extraordinary and special and to try and make them special.”

“Craig-Martin does not focus on the object itself but the overall concept,” said Park Kyung-mee, head of the gallery.

“It’s important that you think, imagine and create meaning while appreciating his artworks,” she added.

One of his most representative works is “An Oak Tree,” an installation of a glass of water three-quarters full on a high shelf. The work, which will not be featured in the exhibition here, is currently on display in the Tate Modern in London.

Craig-Martin is known as “the godfather” of the Young British Artists, a group of conceptual painters and sculptors based in the United Kingdom. He has taught leading artists and YBA members like Damien Hirst and Sarah Lucas.

The exhibition runs from next Thursday through March 31 at the PKM Trinity Gallery in Cheongdam-dong, southern Seoul. Apgujeong Station, line No. 3, exit 1. For more information, call (02) 515-9496 or visit www.pkmgallery.com.