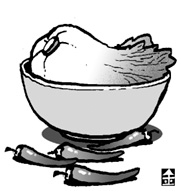 A long time ago, grandmothers used to say, “When Japanese people first tried chili peppers, they found them to be poisonous. So they spread chili pepper seeds to kill Korean people during the Japanese invasion of Korea in 1592. However, rather than being poisonous to the Koreans, it pleased their taste buds. And that’s how it became a Korean food.”

Academics and folk beliefs have long accepted that chili peppers came to Korea from Japan at the end of the 16th century.

But a research team led by Professor Kwon Dae-young at the Korea Food Research Institute revealed on Feb. 18 that a plant called cho, or prickly ash, appeared in many literary documents including the third-century “Records of Three Kingdoms.”

The researchers found that the very same word appeared as the entry “chili pepper: cho” in Korean linguist and educator Choe Sejin’s “Hunmong Jahoe (Collection of Characters for Training the Unenlightened)” in 1527. This, they claim, indicates there was an indigenous chili pepper species in Korea much earlier than previously thought.

The key document thought to be proof that chili peppers were first introduced in the 16th century was Korean scholar Yi Su-gwang’s 20-volume encyclopedia “Jibong yuseol (1614),” which states, “Nammancho [foreign prickly ash] is poisonous and also known as waegaeja [foreign plant] because it originally comes from another country.”

But Kwon claims nammancho and waegaja are different from the chili peppers we eat, and points out that existing studies didn’t consider the possibility that the chili peppers discovered by Columbus in 1492 might be a different species from Korean ones.

Given the popularity of chili peppers, they may have been used here before the 16th century. But that begs the question, where are the recipes?

Among the numerous variations on kimchi in the 1670 cookbook “Eumshik dimibang,” only one uses chili peppers. Most of the kimchi dishes that appear in the 19th-century document on women’s chores, “Gyuhpa chongseo (1809),” include shredded rather than powdered chili peppers.

Kim Chan-byul, author of “The Tasty Birth of Korean Food,” quoted an article from the Joseon JoongAng Ilbo in 1933, to support the argument that red food was not an old tradition: “All banchan [side dishes served with cooked rice] of the three meals of the day are now seasoned with chili peppers, making all foods taste like chili pepper.”

Kwon says, “Chili peppers are absolutely necessary for the long-term preservation of kimchi, just as salt is.” He has resolved to “prove through future studies that chili peppers were used in kimchi much earlier than is known today.”

So is our love of spicy food a fairly recent trend or is it a result of a long tradition? I look forward to the results of further studies.