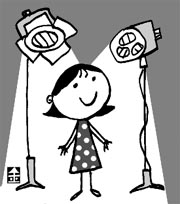 “Slumdog Millionaire,” which won the Academy Award this year for best picture, is about a young man called Jamal from Mumbai who competes for 20 million rupees on a TV quiz show.

None of the actors in the film are famous, yet it was the most talked about film of the year, sweeping the Golden Globe Awards as well as the Academy Awards.

Actors Azharuddin Mohammed Ismail, 10, and Rubiana Ali, 9, who are from the poverty-stricken area of Mumbai where the film is set, received a thunderous round of applause at the Oscars.

However, the attention of the world does not appear to have made the children happier. “I am too tired. I don’t want to do an interview,” Ismail grumbled when he got home, earning himself a stark retribution from his dad.

The Indian government has given the children housing and set up a trust fund for when they grow up, but the parents are complaining, “Give us the money now.”

The problem of young stars and their money-hungry parents first surfaced when star child actors first appeared in Hollywood.

Jackie Coogan, who became a star at the age of 7 in the Charlie Chaplin film “The Kid”’ in 1921, sued his mother and stepfather when he turned 21 for frittering away the $4 million he had earned as a child actor. However, the court ruled that he only get back $120,000.

This started a debate on how to protect the vast sums child stars earned, and in the U.S. the state of California passed a law that at least 15 percent of the money earned by a child actor must be managed through a trust fund by a third party until the child becomes an adult. It is still called the “Jackie Coogan law.”

The law regulates not only money, but also the other rights of child actors, such as education and filming time. The actors who starred in the “Harry Potter” series could not stay on set for more than 9 hours and 30 minutes per day, and had to spend 3 hours out of the 9 hours and 30 minutes studying with a teacher hired by the film company.

Unfortunately, there is no protective system for child stars in Korea. A blind eye is turned to children’s education while they act and sing. The greatest danger for Korean child stars is not parents’ greed, but the negative influence of those in the entertainment industry. It was recently reported that a child star who was famous for playing the role of the little boy No-ma in the once highly popular TV drama “Natural” became an Oriental doctor, but the child star who was more famous for playing Geum-dong in the series was tried in court for pickpocketing.

More teenage stars are coming into the spotlight so it would be timely for the entertainment industry to pay more attention to Jackie Coogan law.